Where narrative and gameplay don’t mix together. 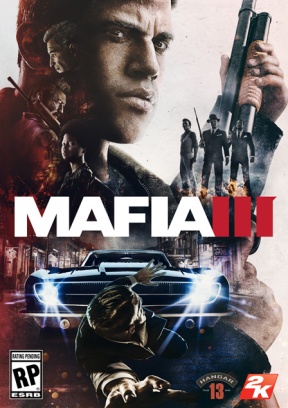 Mafia 3 is a fairly new videogame (I am a little behind the curve on this one) in a series focused on organized crime. Mafia 3 breaks the formula established by the series predecessors, as your goal this time around is to dismantle the mob. You play as Lincoln Clay, a Vietnam veteran who has returned to his hometown, New Bordeaux, where racial tensions are at a fever pitch. The game thrusts you into this turbulence as you control Lincoln, a person of mixed-race, as he struggles to find vengeance.

Please note: Mild spoilers for first portion of the game. I will not comment in detail on the later parts of the narrative.

The racism in this game is presented in its full hideousness. Lincoln is cursed at, called a nigger, attacked, and hated for his very existence. With few exceptions, you are not a hero in this game. You are not even acknowledged as human. The decision from Hangar 13 to have players control such a marginalized person does well to undermine our ideas of what makes a hero and what is moral. The overt and insidious racism in the game is played perfectly. From the obvious Klan rallies to the fact that police don’t respond in black neighborhoods, racism is systemic – and everywhere.

A Great Cast of Characters

Aside from the systemic racism, Mafia 3 contains some of the best characters I have seen in a game for a while. Lincoln himself is an interesting protagonist. Even if he is solely driven by revenge, the brief glimpses we get behind his mask are fascinating. The player gets an idea of how Lincoln is a product of his environment. The vicious cycle of hatred and violence is something that has plagued the man his whole life, and we now interact as he fights back.

The supporting cast is likewise excellent. Father James and John Donovan are my two favorite characters in the game. The two of them represent the two sides/options that are available to Lincoln. Donovan, who knew Lincoln in Vietnam while the two ran spec-ops, is all for the violence. Donovan approaches situations in an astonishingly detached way. As the game unfolds, the player is given two perspectives—one during the game, and one later through a documentary. Donovan feels no remorse for the violence, and seems to see violence as a useful means to an end. Aside from his complicated moral positions, Donovan is a funny and abrasive character who recognizes racism, but his whiteness keeps him separate from the events. He is one of the few characters who does not seem trapped within the deterministic cycle of violence.

Father James represents the other side, where forgiveness and reconciliation may bring an end to struggle. While the game certainly favors Donovan’s approach, Father James’ rhetoric and dialogue is simply top notch. He is given some of the best lines dealing with race, war, and tragedy I have seen in a videogame. There is a genuine sense of loss when we see the world through Father James’ eyes. The violence that plagues the city will never end. Violence, and the organized crime that comes with it, seems more like a mythical beast that can never be fully slain. Despite winning many battles, Father James is a constant reminder that this is a war that will never end.

Where the game works the best are the large narrative moments that defy video game tradition and strive for something that transcends a single medium. Early in the game, Lincoln and crew are betrayed by Sal Marcano. The vile nature of the attack and the horror which follows (and sets the game into motion) is executed in a nearly perfect manner. The existence in this world is tragic and does not hold to rules of decency or even humanity.

For me, one of the more interesting elements of the game were when you faced criticism. You face racism, hatred, betrayal, and loss. In turn, you can give back death to those who wrong you. There is a catharsis in revenge. You as the player can singlehandedly pick apart a syndicate, racket, or human-trafficking ring. Though society hates you, you know that what is being done is good.

However, the consequences of your actions are not always positive. One of your captains, Cassandra, a Haitian gang-leader informs you that now all blacks are seen as threats. You must arm Cassandra and her followers because your actions have put them all in danger. Once again, in the greater scheme of things, Lincoln has barely scratched the surface of the systemic racism. When Cassandra informed me that I was now endangering those I was fighting for, I was taken aback. Rarely does a video game do so well to challenge your ideals of what needs to be done.

Unfortunately, that above example is a perfect transition to the game’s biggest weakness—the gameplay. Cassandra tells me this, but I do not see it in the game world. The city is huge and teeming with people, but there is little to do. You can’t even shop in any store. Instead, you call a mobile arms dealer, which is cool, but it leaves most buildings as simple decoration.

Oddly, the city feels the most alive when you are driving. The talk radio within the game offers a lot of life to the city. We hear of racist attacks, crime, and counter arguments from African American DJs. Unfortunately, these talks do not last long. The game does have an impressive amount of songs for the radio, but with how much time you drive, you will hear them all many times.

The driving between destinations is one of the biggest problems in the game. Without exaggeration, sometimes driving to the objective will take longer than the objective itself. Then guess what—you get to drive back! I got so sick of the long drives in this game that I abandoned some of the side missions.

One thing the game does well is the idea of the side missions. There are no nonsensical missions. Everything you do is moving you toward your goal of dismantling Marcano’s empire. Unfortunately, there are a couple problems with this setup. First, there is nothing to do that isn’t toward the ultimate goal (aside from loyalty missions), which makes sense for the narrative, but not so much for gameplay. Second, the rackets that you attack all follow the same structure. To take over a district, you have to cause enough damage to expose an underboss. Kill both underbosses and the big boss shows up. Rinse and repeat for the whole game.

Worse yet, the rackets you must attack are all more or less the same. Sometimes you have to hit the same location twice before the district will fall. The major boss missions are better, unique, and ultimately more fun. It is too bad you must work (and I mean work) so much for these missions to unlock. In this area, the game needs less. Fewer repetitive missions would have cut the game length, but it would have been better for it. This game is an odd mixture of too much sometimes and not enough in others.

The gameplay’s combat is competent. Nothing special, nothing terribly wrong (in my opinion). It could be better, but it probably won’t make you mad. What will make you mad are the numerous issues and bugs. I experienced three complete crashes, two freezes, and several momentary freezes throughout the game. Further, I finished a mission simply to have it restart (which was possibly the most annoying of the bugs). Open world games always have their share of problems. I don’t think the bugs (on the X-box One anyway) should necessarily be a deal breaker for anyone interested.

I have heard some criticisms of the game becoming a “simple” revenge story. I am not sure what else they expected, but beyond that, revenge stories are a fairly important part of the western tradition (*cough* Hamlet). The story, in my opinion, is the reason to play this game. The gameplay gets boring, but the story does stay interesting through the conclusion. It is odd to a see such a not fun to play, but fun to watch game. There was a misfire here on the part of the developers. However, this game could come to represent another building block for games with great stories. Hopefully, Mafia 4 can hit it out of the parks on both gameplay and narrative. Should you buy it? If you like open-world games, yes, but not for $60. Wait for a sale. 7.25/10