One of the recent megahits of independent horror. 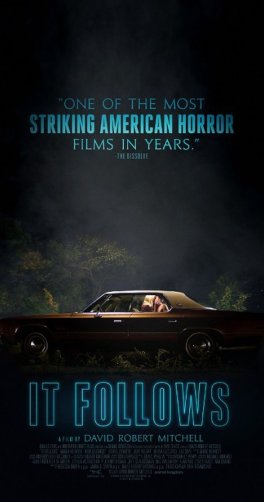 It Follows tells the nightmarish story of the worst possible sexual transmitted disease—a monster that will follow you relentlessly until it catches you. The film follows our heroine, Jay, as she works to escape the monster that only she and others afflicted can see. After sleeping with her boyfriend, Jay is held hostage by the man to prove that she is in.

The plot is fairly simple. Once you are afflicted, you must either run or pass it on. I have heard a lot of mixed reviews about this film. I think part of the reason it hasn’t been as well received is that there is a lack of who the audience is supposed to be for this film. The film is shot and framed like a horror film, but it isn’t scary—and I do not think it is meant to be.

Instead of scares, It Follows focuses on creating a constant sense of dread. When it will appear and what it will look like are not known to either the characters or the audience. At a few points, the audience can see someone approaching in the distance, but it isn’t clear if it is just a person, or if it has found them. The constant state of dread creates an atmosphere of fear while rarely rising to an actual frightening moment.

The story reveals more questions than answers. The lack of clarity of what is happening will divide some viewers. While I understand the desire for concrete answers, this film inspires discussion. What are the limits of it? How could one protect oneself? I think these questions allow discussions into the multitude of themes presented within the movie. Does it represent sexual violence? That is the question that I have focused most on as I re-watched it. I am not certain, but there is definitely a way to see the film in that light.

The directing and music are well done. There are some parts of the film that needed more clarification. For example, why did it seem to take a break in the second act? The characters are mostly believable, but sometimes hard to distinguish from one another (aside from Jay).

It Follows is in a new wave of thought-provoking independent horror. These films rely more on atmosphere than jump scares or gore. They are not perfect, but their attempts to break away from the standard genre rehashes we get every other month is commendable. Worth a watch. 8/10