A witty and compelling crime drama. 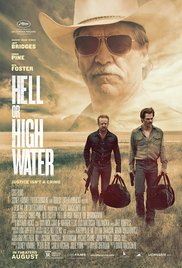 Hell or High Water marked one of the few highlights of an incredibly weak summer for film in 2016. This crime saga follows two brothers as they are robbing a specific set of branches to buy back their family farm. The idea of stealing from the same bank you owe money to is interesting and plays out well in this film. As the two brothers work toward their goal, they are hunted by a near-retired sheriff (played by Jeff Bridges). The brothers (Chris Pine and Ben Foster) are two of the most realistic brothers that I have seen in a film. Their interactions, snark, and commentary feel as though they have known each other for years.

Bridges also does well as an insufferable and bitter old sheriff who endlessly berates his partner. A major theme of this film is people not being happy in their place in life—and this theme stretches from heroes, villains, and side characters. The death of the American Dream is at full force within this film. The idea of time running ahead of the individuals is powerful, but reminded me of No Country for Old Men a little too much. The similarities between the films stretch from tone, setting, and many of the same overall messages. It is disappointing to feel as though you have seen a film before.

Despite feeling familiar, the film is immensely entertaining. The dialogue alone is something that almost never ceases to be top tier. Ben Foster in particular is a menacing not likable/still kind of likable character throughout. His misanthropy speaks volumes to the death of dreams that many young Americans feel. In many scenes it seems as though the characters are wanting to say “if you don’t laugh you will cry.”

Part of what is making this review a pain to write is I did not do it until a couple days after watching the film. Oddly, very little of the film stuck with me aside from the pleasure of watching the events unfold. I do not know if there is much more to glean from the film that is unique to it. Granted, I study American literature, so my perspective might be a bit imbalanced compared to many. The story is a good one, and it is worth telling.

The directing, acting, and dialogue are all good, and do solidify this film as one of the best of the summer. However, did it deserve a Best Picture nomination? Hard to say. Knowing now that it did not win anything makes me wonder why it was nominated at all. (Yes, I know not everything is going to win). The meditations on the loss of opportunity are interesting, but something about the film needed to go further. The final act of the film is stunningly passive, particularly when compared to the momentum the film had until that point. Worth the watch, but don’t expect greatness. 7.5/10