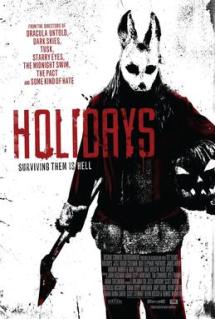 This is the third or fourth holiday-themed-anthology film I have watched. Holidays does not fix itself on one specific holiday, which may or may not be a good idea. Time for another as-it-goes commentary.

Well, the movie starts off dumb as hell. The bullied kid trope is cheap, and to present it so absurdly and grotesquely is just awful. Aside from the bad acting, directing, and just about everything you can think of, this segment is just simply painful to watch. Does this short make us want to have teenagers be killed? Because, I think that is what it is trying to convince us all of.

Horror movies have a bit of leeway with characters, mainly due to the fact that many of them are expendable. However, this is cheap writing, and to go about it so poorly makes the entire short smack of laziness. Bullied teen infatuated with teacher (who allows her to be bullied)—the brilliance just leaps off the page, doesn’t it?

I have tried to defend anthology films before, but this one is starting off as though it wanted to take the genre and sacrifice it for some dark ritual. I suppose the lesson here is that if you don’t have good ideas sleaze and exploitation will carry you through.

I think it might be sign you are hitting the bottom of the barrel to have to make a horror film surrounding this holiday. Couple things on this one, first, kids aren’t scary. Second—just make up some horror tale around this holiday. You will do better than the writers did. I have watched a lot of dumb shit for this blog, and this one might take the cake.

At least this one seems to embrace the dumb horror-comedy hybrid. The Easter bunny here is a weird human-rabbit hybrid that drops chicken eggs and is evil (or somewhat evil anyway). The creature demands a young child takes over for it, and this is the crux of the story.

The creature is at least interesting, but the plot is pretty slim. Nothing else, just a kid taking over the role. This movie (not just this short) is so painfully stupid I am not sure I can make it the rest of the way.

Something with the multitude of options for filmmakers seems to be encouraging just garbage horror films. One has to go through 50 to find one that isn’t crap.

A horror story focuses on pregnancy and abortion. A woman can’t stop getting pregnant (sounds like a right-wing dream) and must seek outside help. Runs into witches, forced pregnancy, blah blah blah.

I’m going to be honest, this one is so stupid I kind of quite paying attention. One jump scare—so exciting.

Can Kevin Smith save this film? (Nope).

Sleaze-ball Ian runs an online web-cam pornographic site and tries to rape one of his employees, he suffers greatly for this. Kevin Smith seems to have an infatuation with despicable characters, and in this instance he might have overplayed his hand. This crap isn’t scary; it isn’t even interesting—there seems to be no point or purpose to any of this.

Want to watch disgusting people? Have at it. There seems to be some sick gleefulness in the misogyny of this film, and even more excitement at the idea of sexual violence.

Another force fed pile of garbage. Seth Green is better than this, and I am not a fan of his. What do virtual reality glasses have to do with Christmas? Fuck you. That’s what.

This is a horrid film with nothing redeeming at all. Honestly, this might be the worst of just about anything I have seen. 0/10