I seem to have an unpopular opinion.

Alien: Covenant is bit of a reboot of the series after Prometheus left a lot of fans (including myself) with a bitter aftertaste. I will not talk much about Prometheus, but the empty plot and characters led to a mildly entertaining, but overall shallow experience.

Covenant takes place ten years after Prometheus, and this time we are on a colony ship. A small crew is responsible for bringing 2,000 people to a new home. Michael Fassbender takes the lead once more, this time as a different android named Walter. After a freak star storm, the crew must be reawakened seven years early, and they are forced to choose between investigating a new planet that is sending a human-made transmission, or going back to cryo sleep. The new planet is the easier and less daunting prospect for the crew, so it seems to be the sensible decision.

The prospect of finding a safe planet, and the inherent risks, make the first chunk of this film more of a story about exploration. Unfortunately, there isn’t a lot of character development. It is made clear that the crew doesn’t get along, and the tensions, bickering, and eye-rolling take place of any development. By the time they landed on the planet, which felt like a long way into the film, I did not care about any of them. I knew that most would die, and felt nothing at this prospect.

Further, they land on an alien world, find an alien ship, and spacesuits that clearly do not belong to humans, yet there is no wonder. Everything is flat. The film forces the initial exploration to be somber due to the star storm killing one of the crew. Here was an odd decision on the writer’s part—the tension and somber nature didn’t have to be there.

These little monsters are fast.

Horror films work best when people are in danger due to things entirely out of their control. In this movie, it is about half and half. Sheer stupidity and carelessness in a new environment lead to the first wave of deaths. The proto-xenomorphs in the first half are vicious, fast, and interesting. The violence is brutal, and it becomes clear quickly that this planet is not a safe option for humanity. The second half of the film shows our hurt and isolated protagonists struggling to find a way off the planet with no transport. Unfortunately, the experience is deeply uneven.

The android, David, from Prometheus is also on the planet. He saves the crew only to use them in his own experiments in creating the perfect being. David’s mind is too advanced and too human for safety and human comfort (hence Walter not being able to show as much emotion), and now he wishes to destroy his creators to make something new. The rise and fall of dominant species is an interesting idea, and Fassbender does great as David.

The broad ideas of the film are interesting, but incredibly undercooked. From a distance this movie works well. It is not until we examine the small details the incongruities and numerous narratological shortcuts become apparent. 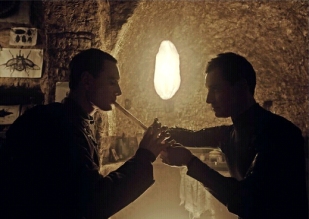 Walter and David steal every scene.

The discussions between the two Fassbenders don’t fit within the movie as a whole. Ideas of art, beauty, creation, and existence simply don’t jive with our crew of idiots. The movie juxtaposes high discussions with absurd decisions based on irrationality and emotion that are more irritating than exciting. No matter what, risking the lives of 2,000 people to save just a few crew members is a bad idea. Also, I don’t know, maybe don’t stick your face in the alien pod thing? Maybe? Right?!

For a science fiction story, this film sure takes liberties with the science aspect. I don’t demand perfect accuracy, but common sense would not hurt. Perhaps even more damaging to the movie is the empty characters. I get that each film is going to have a new crew, but this one goes beyond the norm for crapping the bed in creating characters. Instead, it seems more like a cut-and-past sequel/semi-remake of Prometheus. It even includes a lengthy scene with Guy Pearce explaining to David what the point of all this is. A point, mind you, that David sort of accomplishes, but then goes off on his own ideas.

It is clear that this film is plagued by too many production companies, voices, and other ideas. Nothing is allowed to breath and instead we get a pretty looking, but not-scary Alien film. Director Ridley Scott has (in my opinion) been in a bit of a slump lately. His characters are simply boring. Honestly, I don’t think the man has directed a truly good movie since 1982. Inept, irritating, and grumpy people are not interesting to watch. The characters are so stupid (aside from the android, which might be a comment on society) they could be dropped into a teen slasher film and no one would notice.

To be fair, the cinematography and set designs are excellent. We have a beautiful stage with bad acting dragging it all down. Scott can make beautiful looking films, and I think teamed with stronger writers he could still be a powerhouse.

Honestly, I hated the movie. Even the few bright points were hard to appreciate after having my intelligence insulted by some of the worst characters I have seen from a supposedly good storyteller in a while. I do not understand the popularity, there are better action films, better horror films, and better armchair-philosopher films. Are we so starved for decent science fiction that this passes?

Alien as a franchise has been a mixed bag. This one (for me) shows that it is too reliant on tropes, which limits any real growth, and I would like to see them go back to basics. A crew of fifteen plus two androids was too much. Video games like Alien: Isolation have shown that there still is a major creep factor to be had in this universe. I wish they would take one of the numerous other threads and go with it. I would have loved this movie if it was entirely from David’s perspective. Further, a movie about Guy Pearce and Fassbender’s relationship would be interesting as well. It seems they are trying to fit too much into each. Fans starved for more xenomorph action might find something here, but it just made me want to watch the original. Both Covenant and Prometheus had a lot of promise. They are building towards something, let’s hope it is worth it. 3/10