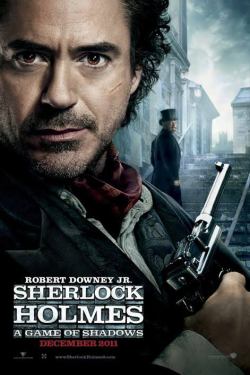 The follow up to the 2009 film finds Sherlock battling the infamous professor Moriarty. Jared Harris, who is usually reliable, takes on the role of the villain. The film plays in a mostly similar way to the original, but tends to exaggerate some of the interactions.

Moriarty’s diabolical scheme is to create international chaos that will lead the whole of Europe to war. Holmes and a reluctant Watson must race against time to prevent the catastrophe. The plot is a bit more convoluted than it needs to be. Red herrings and deus ex machinas abound, a particularly dumb one comes in the final act.

A few problems drag this film down to the point of mediocrity. First, Holmes’ character is now what appears to be psychic, not just intelligent. Any suspense is evaporated in these moments as it becomes clear early on that there is no real risk to him (although I suppose there is some to his friends). Holmes knows who will draw a gun or a knife in a fight, and can plan accordingly. This differs greatly from the first film where he can predict a fighter’s punch in a boxing ring (something that good fighters can do).

The eccentric nature of Holmes is also exaggerated. In this film, he appears more a mixture of Jack Sparrow and Jason Bourne. Whatever remnants of the titular character that once existed in the franchise are a distant afterthought. Oddly, they also chose to make Holmes quite unlikable in this one, as his interactions with Watson in the opening acts move from eccentric inconsideration to just being mean spirited. The question I walked away with was always: why? Why make him so unlikable? Why totally drop the mystery elements in favor of dumb, over-edited, and overly long fight scenes?

Ritchie’s style is all over this film, and it will likely grate on a lot of people. Anytime the camera pans to a specific object you know that Holmes sees a greater significance, but we get to wait until the end of the film to find out what it is. There is no sense of discovery in this film, instead we have stylized fights loaded with slow-motion and close-ups.

The film fails to deliver adequate entertainment. It suffers from simply repeating or expanding too much of the first film without bringing in much new. This one is better left on the shelf. 4/10