Half good half bad. 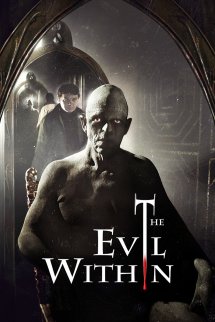 The Evil Within is an interesting look at how small budgeted personal projects can turn into feature length films. The director, Andrew Getty, died two years before the film was done being edited. Getty had been tinkering with the film for years, and the end result is an interesting, but terribly uneven experience.

The film can be broken into chunks, and each one is of vastly different quality. The first fifteen minutes are captivating. The film techniques, staging, sound, and overall surreal quality of the dreams work in a way that few films can match. I wish the entire narrative would have sustained this masterful quality.

A young boy dreams of going on a haunted house ride with his mother, but it is unclear whether or not the ride ever ended. Now, mentally handicapped Dennis (Frederick Koehler) is being taunted and tormented by a demon each night. The demon demands Dennis to commit crimes for any reprieve.

The beginning, and the story surrounding Dennis with the demon are excellent. The slow descent into violence is stunning, oddly funny, and completely captivating. There is a level of brutality in how matter-of-factly the violence is committed, and it makes the viewing experience unique. Dennis is convinced the more he kills the smarter he will become, so he will eventually be able to be free of his brother.

Unfortunately, the sub-plot focusing on Dennis’ brother and girlfriend is terrible. John and Lydia (Sean Patrick Flannery and Dina Meyer) are a couple who hate each other, and argue in every scene. Their dialogue is stilted, forced, and just terrible. I honestly cannot think of a fitting analogy to describe how terrible their acting is—it has to be seen to be believed.

The sum of the movie is interesting parts with painfully bad characters. I can’t say much about the film as it is more something that is experienced than anything else. I cannot do the surreal elements justice. It is an interesting film that is worth the watch despite the serious flaws. 5/10