An interesting and uneven film. 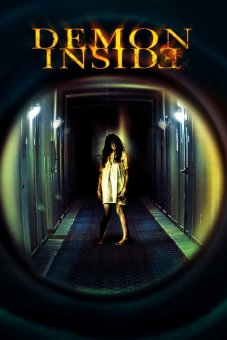 Demon Inside comes alongside a lot of other decent Spanish-language horror films. This time we follow a young clairvoyant named Marta (Paz Vega) who is sexually assaulted in a parking garage by a client. After her medical recovery, Marta gives up being a clairvoyant and becomes increasingly agoraphobic in her new apartment. Secluded, traumatized, and terrorized she now sees visions of violence that seem inescapable.

The film as a whole has a lot going for it, but it also makes some strange choices. Rape as a character development tool is dangerous in my opinion, and it is so rarely done well that I almost gave up on the film fifteen minutes in. Demon Inside actually works in a similar vein to the excellent Darling in that rape is treated as a horrific and traumatizing action. Both films potentially fall into overcorrecting the indifference towards sexual assault by making it seem like recovery is impossible. There is a fine line here and I am not sure what the right answer is. However, Demon Inside is not exploitative—even if the opening might worry you.

The agoraphobic descent of Marta is depressing and tense. As the audience, we are trapped with her, and it becomes increasingly unclear what she is really seeing, what is a vision, and what is paranoia. The film provides a steady and consistent pace with ample tension throughout the first half. There is a vulnerability present within this film that is hard to fully describe.

While the film does provide a solid creeping pace that in some parts is harkening back to the glory days of Rear Window, there are other parts that make less sense. Marta’s psychotic neighbor doesn’t make a lot of sense, and the reactions the neighbor provides to seeing Marta watching her through the kitchen window seem a bit overstated. Further, this is one of many new threads that will come about. Marta’s childhood is also weaved into the story, and while it does develop her character it also muddies the waters.

Perhaps the most obnoxious thing of the film is that Marta installs cheap security cameras around her apartment—emphasize cheap. The film is shot well, and the camerawork is great until these little bastards get hung all over the apartment. We get crappy visuals for a good chunk of the film from then on, and this is truly a mistake on the filmmakers’ part. We in essence get to have some found footage in our otherwise strong film. To make it even worse, the camera glitches and provides an annoying static crunch every few minutes. Each visual blip pulled me out of the film a bit.

The acting is strong, and Vegas does a fantastic job showing a multitude of emotions. The film starts out strong, but the desire to bring in numerous threads pulls the viewers’ attention away from the original concept of the movie. A complaint I have seen on the boards is that this film is boring, and while I do disagree, I can see where this might be the case for some viewers. This is a slow-burn with a deeply methodical pace—if this rings alarm bells for you I suggest trusting those instincts. For fans of more psychological slow-burn, this might be your ticket. 7.5/10