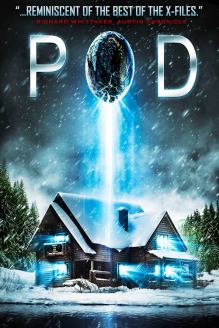 Pod is a science-fiction/horror film by Mickey Keating (Darling and Carnage Park). I have thoroughly enjoyed, and highly recommend Keating for fans of cerebral and thoughtful horror. Pod, like the other films by Keating, challenges some assumptions of the genre while still functioning adeptly within expected modes. We end up with highly stylized and well acted stories that run the spread of horror from supernatural, serial killers, and now government conspiracies.

Pod is a family drama at its heart. Bickering and estranged siblings Lyla (Lauren Ashley Carter) and Ed (Dean Cates) who must put aside their problems to help their brother Martin (Brian Morvant) who has a troubled past with paranoia and delusions. Once Ed and Lyla arrive, it is clear that Martin is severely ill, and now the siblings must try to save him.

The strongest aspect of this film is the acting. Top-notch work from all three performers throughout the entire narrative. Here we have truly excellent work, but Morvant is the clear show-stealer. As a veteran who is traumatized, ill, and desperately needs help his fits of clarity and panic create a compelling and tragic presence. He will at the same time garner feelings of sympathy and terror from the audience.

The interactions between the three characters feel real. The characters are not likable, but they are well textured. It is quite likely any audience member will know someone who is like Lyla or Ed—either immature or patronizing. Both siblings seem stuck in childhood power-rivalries and are often incapable of communicating with each other. When Martin’s instability is added to the mix it creates a tense and often chaotic feel.

All of Keating’s films that I have seen thus far are lean on run time. There are no empty scenes in these movies because there is no time for them. Instead we get explosive little character studies wrapped in bizarre and often troubling plots. Pod’s first half is on par with the incredible Darling. However, decisions in the second half of the narrative begin to feel more derivative than a re-invention of the genre. If you have not seen the film you should stop reading this and give it a try. I do recommend this one.

Martin’s belief that a super-assassin developed by the government fits into paranoid schizophrenic conspiracies. Unfortunately, most trailers ruin this element of the film by letting you know that there is in fact a monster in the basement. Further, there is a bit of a damned-if-you-do and damned-if-you-don’t regarding this style of narrative. If it is all in Martin’s head we might see some commentary on trauma, but it feels a little cheap. If Martin is right (which he is) the narrative becomes pretty predictable.

The stylistic shots and great tension keep the film from becoming boring, but it doesn’t feel like the same movie once the monster is known to be real. Instead we have a bit of a crushing arc towards the inevitable destruction and subsequent governmental cover up of the incidents. I was never bored while watching the film, but I wasn’t fully satisfied when the credits rolled. Ending with a cheap jump-scare seemed beneath the gravitas of the film up to that point.

While I do think this narrative is a bit weaker than Keating’s other efforts (of those I have seen anyway), it is still a pretty damn good movie. Keating’s missteps are stronger than about 85% of horror anymore, and his attention to detail, style, and bringing excellent characters that are acted well will continue to separate him from other directors. In the end we have an interesting, but flawed film. 7.5/10