Wait, this is considered extreme? 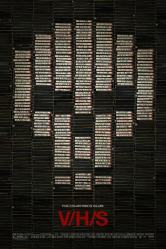 VHS is probably the most mainstream “extreme cinema” that I am aware of. I think in a lot of ways this probably functions as more of a gateway drug to more extreme variants of filmmaking than an actual extreme product. I am not trying to simply knock the film though, I actually kind of enjoy the stories within (more or less).

There is a grand narrative in VHS, but the more interesting parts are the anthology stories within. We follow a group of disgusting delinquents—we are introduced to them as they sexually assault a stranger—and they are doing these things on film for cheap money. To put it bluntly, the characters are basically insufferable, and that does hurt the film as a whole. If you can choke through the first bit, you will see some interesting segments.

Note: I am writing this review after each segment, so it is kind of weird to realize how much the start of this movie completely sucks. I remember it fondly, so I am curious to see if the film can redeem itself.

The first segment “I Like You” (not the real title—I think, but it fits). The makeup effects are quite interesting, and I liked the outcome of the story. However, any gender theorist would have a field day with the toxic masculinity presented here. Look, I get it, extreme cinema is usually pretty violent towards women, but this is simply stupid about it. There is no greater point other than throwing a little twist into what we expect to see. The terrible attempt to show that they won’t rape an unconscious woman to lionize them ignores that they were willing to force themselves on drunk women, and videotape it. The whole thing feels a bit half-baked in the sense that it is unclear who we are supposed to root for. I was on the side of the succubus myself, and I enjoyed the outcome of this one. It isn’t scary in this regard, but there is a sense of justice at least.

The film is quite uneven. Our second entry is much more in line with more classic horror tales. Sure, we have a pretty odd twist that doesn’t make a ton of sense retrospectively, but otherwise it plods along in a familiar way. The quality of VHS is that the entries maintain a consistent feel to them. We don’t have the zany comedy next to a brutal murder. All are mature, and that is in large part what makes this one of the better anthology collections out there.

The second and third entries are strong in their own right, and putting them together does pull you into the film as a whole. Further, after some decent storytelling it is easy to forget about how despicable our primary characters are and their story becomes a bit more interesting.

For a horror film, this one is worth seeing due to some high points throughout the entries. As an extreme cinema film, I have to disagree with people who want to put this up there with films that push the outer boundaries of horror. We have slight spins on common narrative types, but not much else. The shortness of them helps us not get sick of any of the characters, and we get to the brutal killings quick enough.

The film is not as enjoyable a second time through, which is a bit of a bummer. While I do think it is worth seeing, it probably isn’t one you need to buy. The strongest entry in my opinion is the final one in that it actually does something new. I found it an interesting take and a good blend of situational humor and horror. I think this one is worth seeing to round out your catalog of seen horror, but otherwise it won’t leave a lasting impression. 5/10