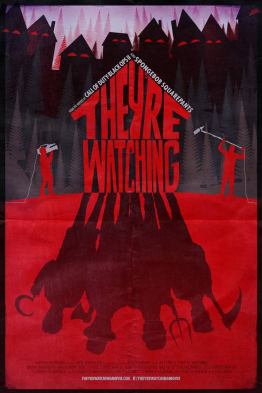 They’re Watching is another docu-style found footage horror flick—oh goody. I do think found footage can be fun, but so often it serves only as a tool to cut corners. We also have the added wrinkle of trying to be a horror/comedy, which is a genre I find easier to avoid than anything else. There are some fantastic horror/comedies out there (horredies?), but they seem so rare. Both genres need a deft hand to be well made, so we in essence have twice the likelihood of a failure.

The film follows a home-repair show that goes international to showcase what a young couple has done with a property purchased six months prior. I must say, the beginning does well to lampoon the home network style shows. The property our couple looks at is in such bad condition there is no way anyone other than a skilled contractor would consider buying it, but the upbeat music and narrator keeps plugging along like nothing is wrong.

The problem is, despite the awareness and humor of the opening, once we are introduced to our film crew formally, the film tanks quick. The characters are absolute shit. The character Alex (Kris Lemche) is another one of those horribly written jackasses. Why do we get confused and think that insecure bullies are somehow funny? Not only is this one character terrible, his terribleness drags down every scene he is involved in. Even worse, Alex in a lot of ways becomes the center piece of many scenes, and we just get to watch a bunch of otherwise okay characters deal with this jerk. In all honesty, once he started singing I almost turned off the film.

The film tries to balance Alex out with adding in the almost equally vomit-inducing Kate (Carrie Genzel). I hated these characters so much I genuinely wanted them to die. I didn’t care if it made sense to the plot, or however it was done. A meteorite killing these two characters would have made this movie significantly better. I might be harping here, but I suggest looking up both of these actors and avoiding anything else they are in.

So I suppose it won’t be much of a surprise that I didn’t really like the film. I am surprised to see such positive reviews floating around of this one—it simply didn’t work for me. If you find jerky assholes funny this one might be for you.

I would have been fine with stupid people or even jerky people getting what is coming to them, but this one pushes it too far. It is almost like they weren’t sure if they wanted a comedy or not at certain points, and there are large chunks of the movie that are simply bereft of humor.

Despite a few high points, this one is dragged down by bad writing. 2/10.