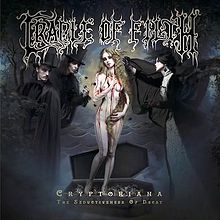 Cradle of Filth is one of those bands that seems to draw as much ire as they do praise. The British metal band has become a sort of punching-bag for elitists for approaching twenty years at this point. There is nothing wrong with folks not digging a band, but the vitriol thrown towards these folks is simply mind-boggling.

A lot of hatred is thrown toward Cradle due to some idea that the band has somehow corrupted black metal. People who say this are either ignorant of the fact that early Cradle was in fact a major player of second-wave black metal, or they just want to seem too cool for the band. Early efforts like Dusk… and Her Embrace are still pretty damn good, and when comparing that work to later ones we can see a major evolution in sound.

I am not saying that all criticisms of the band are invalid as such a statement would be ridiculous. However, people can ask themselves if they think they are sounding like a jerk for no reason, and if the answer is yes: maybe not review the album? I wrote up a snide review of the new Suicide Silence (a band I do not like), but deleted it without publishing. Why? Well, who is that review for? Honestly, if you don’t like a band there is no point seeking out negative reviews for it.

Fans of Filth are probably going to find the strengths of this album, and detractors will point to the weaknesses. I suppose this is true for all albums, but it just seems more amplified here. Further, does anyone try to look at this album objectively?

Their last album Hammer of the Witches showed a return to a more metal-focused sound. It is hard to classify them in a genre anymore as they aren’t in the same vein as really anyone else out there. I see this as both a blessing and a curse for the band. I have seen them live a few times, and each time the opening acts don’t really seem to fit with them.

Since high school, I have had an on-again off-again relationship with the band. In the end, it seems I tend to like every other release. I did not hate Manticore (unlike the rest of the planet) and found Hammer to have some good tracks, but overall it didn’t really have that strong of a feel for me. Cryptoriana seems to be continuing the trend for me as I find the overall feel of this one a bit better.

For the first time in a while we have songs that give room for a variety of riffs and solos. Post-Midian it seems the band was increasingly diminishing the role of the guitars in favor of the bombastic choir and symphonies. Sometimes I like a lot of keyboards, sometimes I don’t, and despite my enjoying this album there is an awful lot of bordering Castlevania-ish keyboard sound occurring.

I heard a lot of folks comparing Hammer to Dusk (I disagree), but I do see this new one trying to be Cruelty and the Beast. On the outside, it certainly seems like the band might be trying to reclaim their glory days. If they are doing this, I wish they would make another album in the vein of Midian, but I somehow doubt they will be able to recreate the magic of that one.

The ever-revolving door of band members helps keep the sound fresh and familiar at the same time. There is somewhat of a formula to the Cradle sound, which is fine, and certainly not unique to them. Dani sounds about the same as he has for years, but his vocals seem slower to me. The very fast banshee shrieks are now reduced to a pentameter at best. The somewhat slower vocals impose more of a structure on the songs that doesn’t always work.

If I have one major gripe about the band it is that the lyric quality seems to be diminishing. The poetic quality of their early albums is still fantastic. Currently, they are still above the norm, but the high Baroque language of their older albums seems to have been left behind.

The sound of this one is very similar to Hammer, but more focused and tighter as a whole. If you walked away from that one wanting more, you’ll probably enjoy this one. The songs function well as stand alones. I am not a huge fan of cover songs, so I won’t include it in this statement, but there isn’t really a stinker throughout. Liv Kristine returns to guest on “Vengeful Spirit,” which will probably make it a fan favorite. Oddly, I find the sound of that one a little too familiar to Hammer to list in my preferred for the album.

There is a certain level of sameness in some of the tracks. The slower tracks do help break the monotony, but it isn’t quite enough. The new drummer is solid, but seems to do the same thing a lot and that is causing a bit of the repetition. My pick for stand out track is certainly “Wester Vespertine,” but I might be in the minority there.

In the end we either have an old band still cranking out bangers, or we have a too old band trying to reclaim their glory. Either way, this isn’t a bad release. I doubt it will bring any new fans (with these guys nothing probably will), but old fans will be satisfied. My biggest criticism is that satisfaction is the best I see this album doing. It is good, not great, but good. 6/10.