Look what I finally got around to watching. 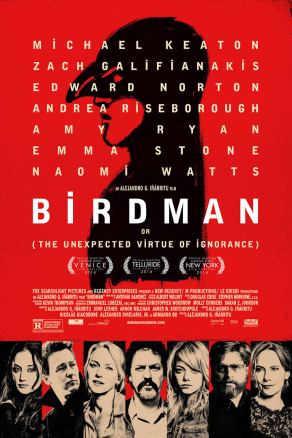 Birdman: Or the Unexpected Virtue of Ignorance won Best Picture a couple years ago and heralded the return of Michael Keaton as a major star. We follow Riggan (Keaton) as he tries to put on a play after deciding to quit his superhero gig many years earlier. The film boasts a major cast, interesting craft, and some great lines. The production of the play seems doomed from the start as Riggan comes face-to-face with the worst of art culture.

To be fair, I should note that I didn’t like this film as much as I thought I would. I tend to enjoy Alejandro González Iñárritu’s storytelling, but something about this one just didn’t jive with me. The camera trickery is great, and the whole film feels like a single take. This adds to the theatric aspect of the story, and shows a great attention to detail.

Keaton is the clear show stealer. Riggan’s dilemma is believable, and we get to see him learn the difference between being known and being loved. He confronts theatre critics who will bury his play because they don’t like him, and he has to constantly reaffirm that even though he was a movie star he is still an artist. This is a good argument, and the film is self aware enough to flip off both sides of the debate.

Where the film falters a bit for me is that it doesn’t seem to stay on point as much as it should. In some ways it reminds me of stories circling around Alfred Hitchcock’s Rope where the camera and the cuts became perhaps more important than the story being told. I think that statement goes a little too far for both films, but it does serve as an indication to what the weaknesses here are. Riggan has to deal with incredibly obnoxious people. In particular, Mike (Edward Norton) who is what most people see as the average theatre actor. He is pretentious, crude, and a complete asshole. I appreciate the importance of his character, and the first half of the film sets him up as a major antagonist, but then he simply disappears. Any interaction between he and Riggan vanishes aside from the scenes of the play.

Where Mike’s disappearance pissed me off is that Mike attempts to rape his costar Lesley (Naomi Watts) on stage and nothing comes of it. The two are dating and for whatever reason he is able to get an erection for the first time in a while when they are sharing a scene. His assault of her is played for laughs, and I think not acknowledging this aspect of the story was a major oversight. With all the recent shit coming out of Hollywood lately these seems increasingly tone deaf. Mike never gets his comeuppance, and while this might be a point about the industry it simply didn’t sit well with me.

Mike’s character and lack of conclusion is not the only area where the film seems unwilling to follow through with its own thesis. The conclusion of the film could have worked as a perfect summation of the revelations that Riggan has about his place in the world, but it simply isn’t willing to really pull the trigger (pun intended).

I think for me this film simply brings up a lot of ugliness in the art world that I am aware of. There was no surprise for me in how the people treated one another, and I think this is why I simply wanted it to end. The film is not bad, but I’m not sure I think it earned Best Picture, either. The acting is excellent. Set designs, scenes, lighting, camerawork, and dialogue are all fantastic. Yet, despite all of this the film didn’t seem to go anywhere for me. Ending it tragically would have made a significantly stronger point, and I believe this was a missed opportunity. I think it is worth seeing, but only if you’re the type to enjoy films as discussion more than films as story. For that reason, I don’t think I can give it much more than a 5/10.