Revisiting a well made, but ultimately problematic story that brought extreme horror into popular discussion. 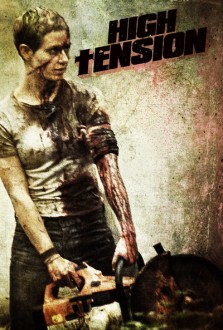 First of all, let’s give a big hand to Amazon Prime for only having the dubbed version of High Tension because apparently subtitles are more distracting than having no dialogue line up with lip movements. Why the hell isn’t this an option we can choose when renting a film? Further, the dubbed voice actors aren’t exactly top drawer quality.

We follow Marie (Cécile de France) and Alexia (Maïwenn), who are visiting Alexia’s family farm. Unbeknownst to them, a psychopathic killer is lingering near the farm and the two are forced to fight for their survival. Alexia is kidnapped, and Marie must race against time to save her friend.

On the surface, this film isn’t that different from other slasher films. Director Alexandre Aja understands horror quite well, and he amplifies tropes to make his films more intense rather than reinventing the wheel. The film does a lot of things right—it looks great, sounds great, strong acting, and great gore effects. We are also treated to some sheer brutality with power saws, axes, scenes of necrophilia, and so forth. Sounds like a party, right? Right?

French horror usually brings the gore, and this film does so in excellent fashion. It is hard to not love the effects and makeup team here. A lot of talented folks are involved in this one. Where the problems in this film arise is in the last fifteen minutes, and they are so problematic that many (including myself) turned away from the film for a long time. If you want a well made, but problematic film, give this one a try. I will continue the review below, but spoilers will follow.

All of the tension, violence, and great scenes are completely destroyed when the great twist is revealed. To be fair, this film came out when every horror film had to have some sort of twist it seemed, and Aja wanted to turn it up to 11 (like he does with everything else). So, it ends up that Marie is the killer the whole time. While this sort of twist within a horror film isn’t new—it doesn’t make a lot of sense here. Plot holes and twists are common, but here nothing makes sense.

For example, the killer strikes through the front door—does this mean that Marie crawled out of the window, climbed down the side of the house, and then rang the bell to kill the father? Also, where the hell did the killer’s van come from? Everything unravels for a cheap shock.

A cheap shock is all that it is. For a few minutes you will be stunned—your jaw might hit the floor in surprise—that is, until you think about it after. A great twist allows things to be continuously unraveled and lead to more interesting insights—this one falters about five minutes into the film and never recovers. I remember when the film came out and it seemed people fell into two camps; people who could stomach the ending and those who thought the movie was ruined. I find myself hopping between sides depending on how recently I saw the film, which makes for an uneven opinion on my part.

Knowing the twist might help if you haven’t seen it before. The stun of the plot holes might seem a little less obnoxious. A stylized, brutal, but greatly imbalanced experience. Give it a try if you’re in the mood for something that looks great, but might annoy you 5/10.