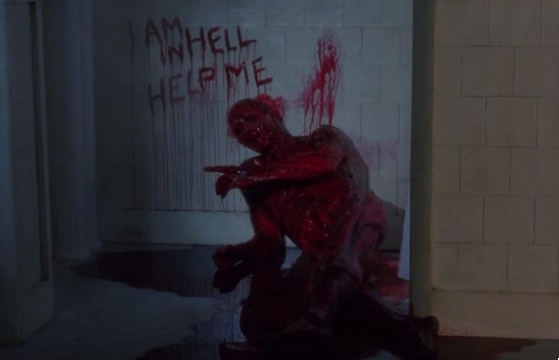 The second film of the franchise proves to be a bit unbalanced.

Hellraiser 2 picks up right where the other ends, so spoilers are more or less going to be unavoidable from here on.

Kirsty is in the hospitable, and has to explain that demons killed her dad, returned from the dead uncle, and step-mom. Of course, no one believes her, so we get to go through all of that stupid nonsense before the movie can actually begin.

But wait! The movie actually starts with a quite lengthy recap of the first film (which is annoying if you watch them back-to-back). A lot of the first quarter of the film is spent in the past, whether it is the previous movie, or a brief introduction to the human version of Pinhead, or the second recap of the first film…. The film makes a lot of decisions that change the lore, and I might be in the minority here, but I actually like several of them.

Dr. Channard brings Julia back to life in a similar way that Frank is resurrected. The body models look better here, and the practical effects once again stand up. Tiffany and Kirsty open the puzzle box, and the pissed off Cenobites take everyone to hell this time around. The second half of the movie transitions to a surreal and bizarre experience.

The first half is predictable, but tenser; the second half is chaotic, but more interesting. The rules don’t matter in hell, so hallucinations, surreal imagery, weird sounds, and a labyrinth like setting all fit. Despite the interesting second half, two lengthy recaps and a bit of filler seem to indicate where the series is going in the long term.

We get to understand the Cenobites a bit more—they were once human. I liked this aspect, but it makes them less all-powerful and less frightening. They are magical undying humans, not demigods—or at least that is how I see it. Pinhead is still a badass, and is once again played by Bradley, who can give the great lines the best treatment.

The weird ass second half is likely to be divisive. I found it to be interesting and oddly watchable. When they make Dr. Carrahan a cenobite things get a little corny, and we do end up with a Kirsty vs. Julia scenario again. So we have a repeat and a Cenobite with anime dick fingers—great. I am once again being perhaps a little too glib—he makes an okay Cenobite (particularly with those coming in 3 to compare him to). For fans of the series, this one is worth watching. I find it pretty enjoyable. 8/10

Note: the film does end with a spinning tower of nonsense, which is a pretty good analogy for the rest of the series.