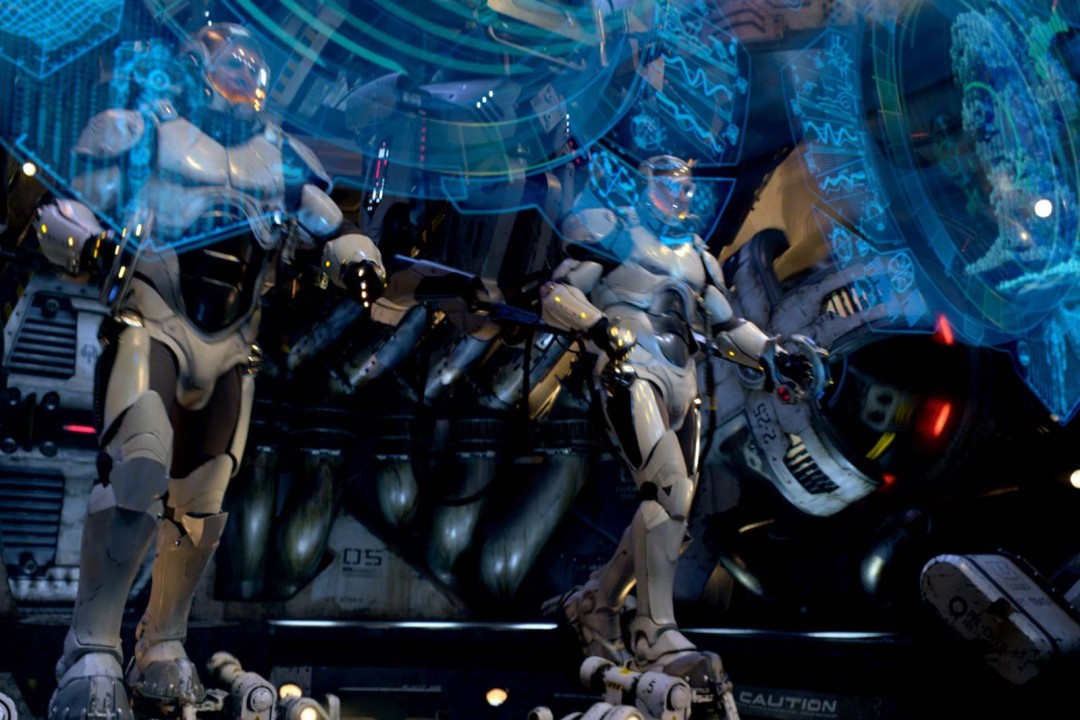 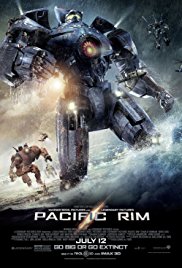 Pacific Rim is a film by Guillermo Del Toro, and this film kind of proves that he is a bit of a hit and miss director (for me anyway). A lot of people like this film, and I have been browbeaten for years to finally get around to watching it. I decided to watch this one in an effort to see the second one in theaters, but after this I have no intention of seeing the sequel.

In short, the film is about monsters called Kaiju, who have come from a different dimension and are now wreaking havoc on human populations. In response, humans have made mechanical monsters (Gundams) called Jaegers, and now they beat the hell out of each other. We follow Jaeger pilot Raleigh (Charlie Hunnam) who gives us his best Batman impersonation through his overly long narrative. The introduction to the film comes in at about twenty minutes, and there is no reason for it to take this long. The plot of the film is paper thin, and instead of just embracing the cheesiness we have a bunch of terrible characters who don’t know how to talk to each other.

Pilots of the Jaegers mind-meld with their co-pilot so the stress of controlling it doesn’t cause someone to flip out. Raleigh’s brother is killed in battle, and now Raleigh is helping build a massive wall to protect the cities (because apparently he was fired from the program or something, despite probably being able to help in some way). We then have commander Stacker Pentecost (Idris Elba—also, who the hell named these characters?) come and talk Raleigh into coming back. This whole chunk of the narrative could have been avoided. It is completely pointless, adds nothing, and just gives Raleigh and Stacker a chance to out tough-guy one another. But wait, there’s more! We also have other insufferable characters like Chuck Hansen (Robert Kazinsky) who is another pilot, and for some reason they decided to make being a dick his sole character trait. We get to see Chuck and Raleigh fight and scowl at one another for more time than we see monsters and robots fighting (I didn’t actually do the math here, but I wouldn’t be surprised if that figure is accurate).

In an effort to be the worst Bachelor spin-off imaginable, we get to watch Raleigh test out other pilots. Stacker’s surrogate daughter Mako Mori (Rinko Kikuchi) is the obvious choice because Del Toro decided to not bother giving any other contestants names. Yet, Stacker doesn’t want her to be a pilot and blah blah blah. The film drags along here, and this is simply bad writing. Everyone knows what is going to happen, so just get to the damn point already.

But wait, there’s more! We also have two of the worst written characters as our scientists. Newton Geiszler (Charlie Day) and Herman Gottlieb (Burn Gorman) might take my prize for most annoying characters in a science fiction film of the last ten years. They are horribly written, insulting, and simply pointless to the plot. The film really wants to be Independence Day and they opted to up the annoying factor (and multiply it by two) of Jeff Goldblum’s character. Hell, the whole movie is basically a wanna-be ID, but lacks the charm, decent acting, fun characters, actually interesting action scenes, any emotional investment, a sense of novelty, and just about everything else that made that film a cheesy treasure.

The horrid characters truly drag down the film, but the plot isn’t much better. We have a stupid plan to end the war once and for all (guess the sequel wasn’t penned yet), and there is no sense of mystery here. All of the events of the film are painfully predictable, and from the mind of Pan’s Labyrinth this is simply inexcusable. The quality of this film is more in line with Michael Bay than anything resembling genuine art.

I can hear people countering that this movie isn’t meant to make you think—don’t worry, I had no illusions of that going in. However, interactions with aliens (or whatever they are) don’t have to be so grounded in stupid genre conventions. Calling this film derivative is an insult to derivative narratives. This is a cookie-cutter filmmaking through and through.

If you are hoping that the fight scenes will make up for this, you will be disappointed. Del Toro’s usually solid hand waivers here as we have the scenes muddled with cuts, rain, or a variety of other things that make them hard to see. The scale of these battles is hard to discern as the obvious CGI masking of everything is well, obvious. The distance shots work better, where we see the Jaeger holding a fishing boat and trying to get it to safety, or when they are standing in defense. Once the battles start with our giant green fish-monsters, everything turns to crap.

This film sucks, it isn’t epic—it is lazy filmmaking that proves blockbusters don’t need to understand creativity or even competent writing. 2/10