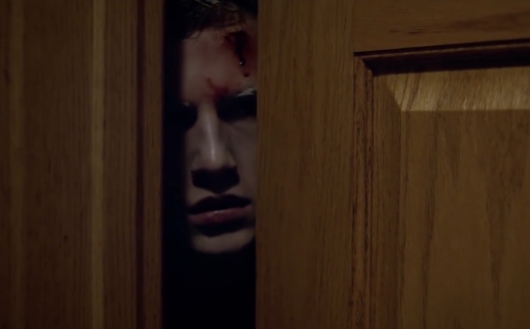 Let’s take a look at one of Netflix’s newer films.

Netflix really wants to be the next big thing in production instead of streaming. While some might look at this and think “great,” there are some problems. The first major problem is that what is available to stream is quickly becoming primarily Netflix productions. I haven’t watched many of these films, and those I have seem to be lacking in some way.

The Open House is no different, we follow Logan (Dylan Minnette) and Naomi (Piercy Dalton) who must move into her sister’s home (which is for sale) after her husband and Logan’s father is killed in a freak accident. Upon arriving at the mountain home it does not take long for odd occurrences to begin happening.

Dylan Minnette is usually good, and I am surprised to see him in such a sleepy film. There seems to be a bit of an identity crisis unfolding for us as we watch. The film doesn’t have a centralized identity, and this is a major problem. We have soaring music over beautiful nature, which makes the film feel more like a somber drama. We have a tense relationship between the characters, which makes it seem like a family drama. Then, we have a lot of weird jump scares and “horror” type shots that just don’t fit. Is this supposed to be a supernatural horror (they play this one—a lot) or something akin to a home invasion (this is what the film actually is)? There is a difference between fear of the unknown and not being afraid because you have no idea what is going on. The near continuous attempts at dread are more tiring than captivating.

Beyond these incongruities, we also have a plot that isn’t that interesting, or purposeful. Whenever the house is open on Sunday, Logan and Naomi have to leave, and this is when we see a lot of the supposed creepy stuff happening. The overbearing soundtrack moves from ill-placed to out-right annoying. It becomes clear before the halfway mark that what we have is a gimmick horror film.

By gimmick-horror, I mean they took a setting—an open house—and decided to play the “what-if” game. What if a killer is stalking people in open houses? (Never mind that Millennium had an episode about this about 20 years ago). These horror films do this with numerous settings, or holidays, or whatever. Sometimes they can at least be fun, but they usually aren’t anything special. This film is so damn dreary that there is no fun to be had. The characters are so tense (for no reason) there is no reason to be scared. I suppose at least boredom is a constant companion.

We watch two flat character be bothered in a house for about 90 minutes. The film looks fine, the acting is fine, and it all has an air of competency, but it just doesn’t bother doing anything interesting despite strong technical features and a good cast. Everyone and everything is just wasted here.

There are a lot of good threads in this film, but none of them are ever explored. While watching it, you will think of the numerous other films that could have been. Instead, we get a boring and lengthy family drama that becomes a home invasion thriller in the few minutes—and none of it works. An exercise in tedium. 3/10