A real look at an exorcism? 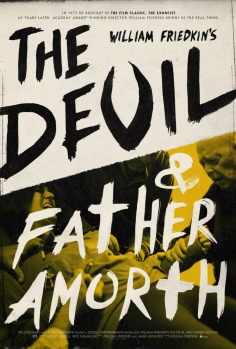 I’m going to take a stance here that might annoy some readers: I think a lot (probably all) of this film was staged. William Friedkin, who directed the amazing Exorcist seems to be drawn back to the devil, this time he follows Father Gabriele Amorth as he performs a ninth exorcism on a young woman.

We follow narrator/star Friedkin as he revisits sites from The Exorcist and other interesting locations in Italy (seriously, there are some cool locations on display here). It all leads to the exorcism of a woman in her forties who seems plagued by constant pain, bits of mania, and other bizarre behaviors.

Before I discuss my stance on the film, let’s talk about whether the film is enjoyable or not. The film has a claustrophobic feel due to being primarily shot via handheld, which adds to the sense that we are perhaps watching something we shouldn’t. Friedkin is a bit heavy handed as a host, and often interrupts those he is interviewing (which is annoying as hell). He is also a bit intense in his narration, pausing dramatically… for…no…reason. We also get my favorite feature in horror films: an overbearing and absurd soundtrack. The music adds a filmy layer to an experience that is supposed to be a documentary.

It is compelling enough, I suppose. Some of the interviews are interesting, but all of them are too short and too scattered to give deep insights. There is a ring of passion to the experience, but there is also an unpleasant taste to much of it that is hard to reconcile.

Anyway, let’s get to the actual exorcism.

The exorcism itself is long and honestly a little boring. The woman writhes in the chair and speaks in a demonic voice. However, what do you imagine a demon to sound like? Can you hear it in your head? That is exactly what her voice sounds like. It sounds too much like a Hollywood demon. I believe it was edited post filming, but there are other things in the scene that don’t make a lot of sense.

After the exorcism, it is quickly realized that she is not cured, but before this “shocking” surprise we see her boyfriend hold her down again like she was about to snap. How did he know to do this if it was so shocking? Why does it seem like the people holding her aren’t really holding her that tightly? Why is no one in the room fussed at all about the whole thing (and there are about twelve people in the room—you know what they say, the family that exorcises together…)? Why the hell is the boyfriend smiling during these disturbing moments?

I can appreciate that many could probably argue some of the above questions, but taken as a whole I find it hard to reconcile with the idea of this being authentic. The film does do a decent job by at least giving medical professionals a moment to discuss other options. Further, the idea that exorcisms might work in the same way therapy does was quite interesting.

Either we witnessed a real exorcism that was almost certainly edited, or we witnessed a mentally ill woman being taken advantage of, or it was all a scam. I’m not sure where I stand on the latter two, but I doubt the first.

The most damning evidence of it being faked is that in a spectacular moment she moves across the room on a chair and does other unexplained behavior, but guess what? Friedkin forgot his camera during those scenes. Do you believe it? I don’t, personally.

Perhaps we are too jaded as a society. The whole thing felt too much like a horror narrative we have seen too many times. Adding in conveniently not-filmed sequences, cheesy horror music, and an overall feeling of making sure this is as artificially authentic as possible makes for a doomed argument.

The film will convince no one of anything new. Think exorcisms are legit? You’ll probably see this as truthful. Think exorcisms are a scam? You’ll not be convinced by this film. It isn’t a complete waste, but I doubt I’ll ever have the inkling to watch it again. For those who are curious to see what Friedkin did here, tamper your expectations. Otherwise, this is a skip. 3/10