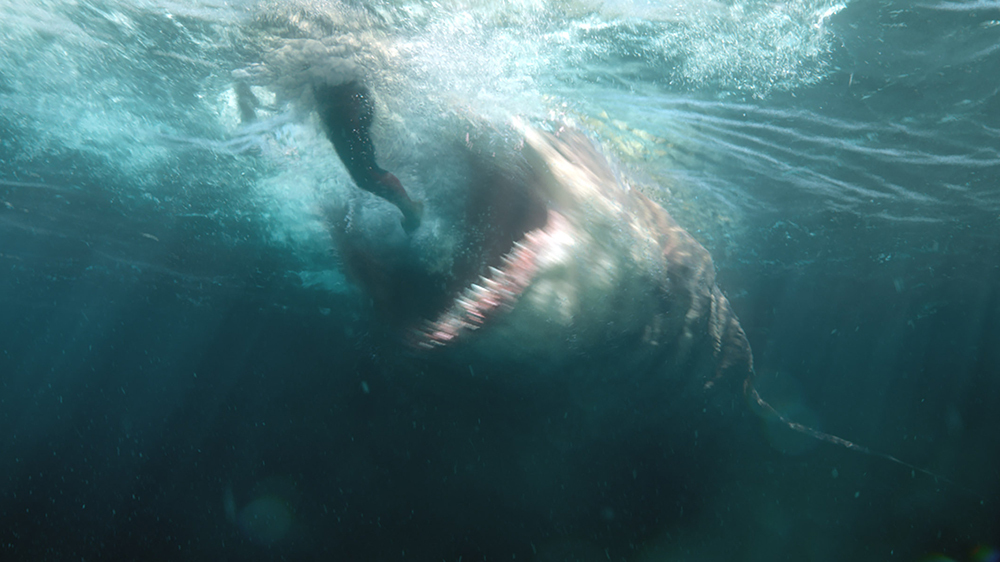 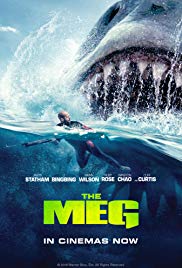 The Meg is a new shark film. I am sure most of you can already imagine what the film is about because the shark film formula hasn’t changed much since the original Jaws. Now, I like a good shark film here and there, and this one has done stunningly well this summer.

We follow Jason Statham (his characters don’t need names) as he fails to rescue everyone from a damaged submarine at extreme ocean depths. He is convinced something was outside, and whatever this was prevented him from saving everyone. He must leave his friends behind.

We then jump to a bunch of new characters who are deep-sea exploring. Our primary lead is Suyin (Bingbing Li) and her father Zhang (Winston Chao) who are running a major laboratory under the ocean. Their wealthy benefactor Morris (Rainn Wilson) also arrives to see this new discovery of an ocean under the ocean.

Splitting the intro this way doesn’t ruin the film, but it makes for a surprisingly exposition-heavy start to a film about a prehistoric shark. Of course something goes wrong, and the crew must find Statham (who hasn’t dived in five years) to complete the rescue. The whole old-gun who doesn’t want to do it anymore, but is sucked back in for reasons trope is alive and well here—and I don’t think it was needed. First, this trope is lazy anymore. The film could have cut the bloated running time by having Statham already on the rig, or be part of a rescue team that doesn’t require empty scenes of him drinking in Thailand.

It feels like a long time before we finally see the megalodon, and it feels even longer before the popcorn action really begins. There are too many scenes of characters sitting around talking. The dialogue isn’t sharp enough to maintain these narrative threads, and instead it just gets a bit boring at times. Everyone is a cliché, from the grizzled hero to the dipshit rich owner, to the smart/cute kid. Clichéd characters are fine, but know what movie you are making.

The film takes itself way too seriously in one moment to try and ham it up in the next. Referencing shark week is kind of funny, but the environmental point five minutes later seems a little phoned in. The Meg is a stupid and fun movie, or at least it should have been. Forced attempts at bringing up the importance of science or nature don’t really jive when the whole plot of the film is “see new shark—kill new shark.” In one particular scene they are sure to chastise the Japanese shark-fin soup trade by showing the horrid aftereffects, while this is a decent point, it is odd to chastise a group for killing a shark for no reason when you are trying to kill a shark for no reason.

The film works its best when it is just a straight up shark film. The meg looks surprisingly good, and it does get a chance to reek some fun havoc. A little more (a lot more, actually) would have been nice. There are moments of genuine fun to be had, but these moments are a little too spare for the film to fully work. I have to note that the effects are good, and we get a more fluid and fast shark than we have had in many of these films before.

I suppose I should mention the discussion on whether or not this film is pandering to China. It seems that any film that has a Chinese actor is going to be pandering now, so we get to deal with that. However, is it? I’m not sure. The Chinese actors do well, but so does everyone else. The more international feeling of the film isn’t a bad thing, but it does make you wonder how these people know each other at some points.

I think the more interesting aspect of these “pandering” movies are that it seems the best way to increase diversity in films is money. For decades the diversity discussion had lingered, and it seems out of nowhere that Hollywood has decided to wake up and get on board—at least in this area. As said, the international cast doesn’t hurt the film, and it is hard to imagine how it could. The scientists on board the rig could be any ethnicity and audiences should accept that reality.

The Meg becomes an interesting film in this regard. It isn’t great, but it proves that there is room for big-budget fun films outside of superheroes still. The diverse cast works (hey, Hollywood, pay attention) and people of different ethnicities can easily be seen by audiences as coworkers, friends, or even lovers.

Where the film remains somewhat problematic (aside from narrative shortcomings) is how the people react to the shark. Even when I first saw Jaws I couldn’t help but wonder if the people were in the wrong. My intent here is not to be ridiculous, but the amount of effort put into killing creatures in their own territory has always been a bit weird. The Meg seems at odds with this issue, too. Shots of dozens of sunscreen bottles on the ocean floor, and brief discussions of the environment are mentioned, but the film is still about watching Statham fight a giant shark. In the end, we have a film that is at odds with itself in more ways than one, and this causes a major viewing imbalance. 5/10.