Let’s check out the newest film in the Conjuring universe. 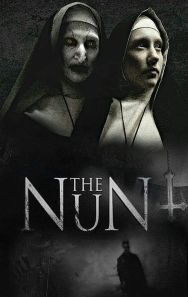 I have enjoyed the Conjuring films overall. I think they provide a good balance between genuine family drama and classic horror. They aren’t the scariest films around, but they fulfill a niche that works. I was excited to see The Nun when it was announced because the titular villain is if nothing else interesting.

We are first introduced to Valak in The Conjuring 2, and she is underplayed a bit. The nun-demon is creepy to look at, but lacks mobility. With this prequel, we run into a similar issue.

We follow a young initiate named Irene (Taissa Farmiga) who accompanies Father Burke (Demian Bichir) as he is assigned to investigate a suicide at a remote Romanian Abbey (should abbey be capitalized?). The abbey (I’m going to be inconsistent here—good work for an English teacher…) is a wonderful setting. The film drips with classic Gothic appeal, and the dark corridors and wide rooms make for a setting that is both claustrophobic and desolate.

Our two leads are fine, and the meet a young French-Canadian man named Frenchie (Jonas Bloquet) who serves as their guide once they arrive. Frenchie is a bit of an odd character, and he serves as the muscle, comic relief, and our bridge to the deeply religious world all at once. He does fine as the first two, but the third is where things get problematic. A major theme of this movie seems to be two steps forward and one step back.

Let’s start with the setting and characters. It is a wonderful set, and the creepy atmosphere practically jumps off the screen. However, we don’t get a good sense of what is what and where is where. The father is barred from certain areas, and it isn’t clear what these boundaries are. I had hoped our character Frenchie would serve as our guide (for us non-Catholics) as to what the rules are. The father could have easily said “Oh, we can’t go in there because of these reasons. We will stay here” and this would have helped me a lot. Instead, Frenchie becomes a non-love/love interest and muscle for the group. He just doesn’t fit, and the humorous moments fall flat more than half the time. I don’t think this is necessarily due to the actors not doing well, but rather it just didn’t make a lot of sense for the three of them to be together.

The larger problems with the film come from the writing. The film is more interested in setting up twists than establishing a solid story. Further, I wasn’t sure who was supposed to be the principal protagonist for about the first half of the film. We are given more or less equal time to both the father and sister—and both could have been more rounded out. Another 15 minutes or so would have helped establish things a bit more. As is, the world-building comes a little too fast and loose to really ground the film.

Don’t get me wrong, some of the twists are interesting. We are also treated to a couple nice set-pieces (one in particular is one of the best shot prayer sequences I have seen), but the film as a whole lacks bite. We have too much to introduce too quickly to allow the dread to set in (I was honestly seeing how many to/toos I could fit into one sentence there). The demon nun is interesting at a distance, but doesn’t work as well during the more action-oriented sequences. I had a problem with this in Conjuring 2 as well, the nun looks scary, but lacks the physicality they seem to want her to have.

I liked most of the characters—this has become a mainstay of the series. I also liked a lot of the shots here. There are some tasty scenes—just not enough. This one never really took off for me. It is hard to describe, but it just stayed at an expected-sequel-feeling level. Don’t get me wrong, I had a pretty good time watching it (the final act is perhaps the weakest—but no spoilers). I think this is better than the first Annabelle, but a little inferior to the others. I think they were reaching for something more profound than what ended up as the final result. If you’re a fan, give it a go.