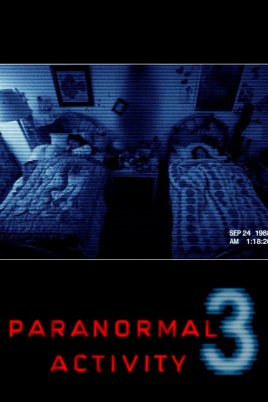 I am not sure there is another franchise that released two prequels in a row, but here we are. Paranormal Activity 3 follows Katie and Kristi’s parents, and we get to kind of see how the haunting began.

I should have put this in the second review, but do be aware there will be spoilers.

The film begins with a lengthy reshowing (and addition) of crap from the second one, and this shows how little faith this series has in its audience. These films are so cut and paste that we need to have some reminders as to what is going on.

Once we finally get back to 1988 we are introduced to the young girls, their mom Judy, and her boyfriend Dennis. One thing this film does right is the characters are overall likable. Judy and Dennis seem to be a loving couple, and neither of them are total jackasses throughout, so cheers on that one.

Another thing this film does well is that we get back to the camera being a central role. The story is built around Dennis trying to capture something after seeing something odd while trying to film a sex tape (yes, this is in every feature so far). The technical stuff is kind of fun, and it helps centralize the themes a bit more.

Spooky crap starts happening quicker this time, and we are given the same scenario of fake-out, loud noise, or jump scare. Granted, I do think the best scares are in this film, but they don’t feel new anymore. It is hard to justify seeing the same film (more or less) three times in a row, and while this one is perhaps the most sophisticated as far as setting up and following through on frightening moments, the edge has dulled.

Another unfortunate aspect of the sameness of these films is that this one probably has the best characters, but they are still shoveled into three available categories. If you want to write a Paranormal Activity film, you need to have someone haunted, someone who is curious enough to film it, and someone who passively dismisses it all. (You may add in a shadowy cult figure if you like). Every character in the first three films falls into these categories, and they are all present here.

Perhaps the most obnoxious bullshit this series now puts forward is showing non-scenes in the trailer. Numerous scares shown in the teasers are simply gone (including everything with the house burning—you know, the fucking crux of Katie’s trauma in the first film). The idea of creating scenes to sell something and then cutting them is one of the worst practices in the film industry. While it can happen accidentally, it happens too much in this series to be a mistake. Shame on them for pulling this crap.

The lore is all over the place, and this film really begins to dick with the established story, but don’t worry, it is going to get a lot worse.

The saddest part is that this is probably the second best film in the series, but with all the underhanded crap, poor consistency, and obvious formulas showing it is too easy to already be burned out on them. Oh well. Can’t wait for the next one!