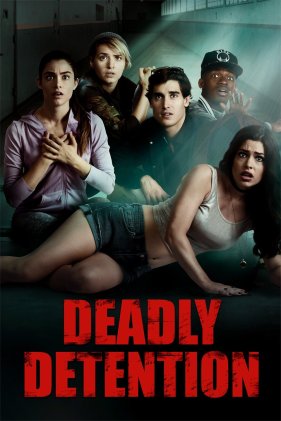 Either I haven’t been paying attention or there are suddenly a lot of teen-scream films out on Netflix lately. I debated running a series on this, but it is hard to say how many of these films are actually watchable (as though that has stopped me in the past). Anyway, let’s see what young horror fans are checking out.

I will be reviewing as I watch.

2 minutes in: this was a terrible mistake.

Why horror films set in high school cast people in their late twenties (or early twenties) is something I will never understand. Immediately, the film causes a bit of a misfire as it doesn’t make sense to see folks this old on a school bus. The disruption to setting (within the first couple minutes) is completely unneeded and is something horror films (all films really) should strive to avoid.

I genuinely wonder if they meant for this film to be a comedy or reverse engineered the tone after the absurdity of the characters became apparent in editing. I haven’t seen a group of kids this stereotypical since The Breakfast Club (and that movie can piss right off—but that is for another day).

I had my fair share of detention during public schooling, but I don’t think I ever really got dressed for the occasion. I would challenge the makers of this film to go check out a high school just about anywhere in the country outside of the posh Hollywood environment and they might realize how absurd this film looks. We may as well be looking at a film about Martians as the experiences of these kids are so far removed from what a normal student would have.

4 minutes in: I guess skateboarders actually don’t know how to walk. Fascinating.

Looks like I need to retract my statement about posh Hollywood high schools. This looks like a prison. Why are they in a prison? Why is this the setting of the film? Would anyone (student, parent, or administrator) actually see this as a good idea? The crap reason they gave is stupid. This is stupid!

We have had two scenes of people cleaning a table. I wish I was kidding. How many character-building scenes for most of the characters? Zero.

I’m not sure if the fact that the comedy in this film appeals to our inner 12-year-old is a pro or a con. I mean, I suppose that is the audience…

Why is there always a teacher’s pet in detention? Saturday detentions are relatively uncommon, so to get this sort of punishment something must have been done that goes outside normal delinquent behavior. You might be wondering why I want a little realism in a stupid horror film and the reason is because it helps. I don’t believe any of these actors are students, the principal is a pathetic stereotype from the mind of a 10-year-old, and the setting is ridiculous.

12 minutes in: this is going to be a long review.

The sheer amount of slut-shaming in this movie is almost mind-boggling. Let’s do a rundown of our detentioneers. We have the rich snooty douche, the skater, a Jesus-freak, a suck-up, and a slut. While none of the characters are interesting (at all) the film goes out of its way to vilify our stereotypical slut. Kind of makes you wonder who the real-life counterpoint is here.

We have a principal who appears to be aroused by a student (male) and an overly sexualized student (female) who serve as our punching bags. While the actress and actor are over 18, their characters are not, which means we are sexualizing children here. I guess I’m an old prude now, but I just don’t find this sort of shit funny. The principal should be fired (though I am sure she will be killed with a phallic shaped object later). Humor can be used in dark situations but doing so requires a savviness I don’t think the creator of this film is capable of.

22 minutes in: oh, I guess we’re getting to the horror part.

Our killer is so far unseen. Our idiots are locked inside. I wonder if these disparate individuals will now have to come together to survive.

I should be drinking.

34 minutes in: let’s wander around for a while.

The film is going nowhere. Despite seeing a murder, the kids don’t believe it (for reasons) and only when they finally find the body do they seem to take this seriously.

The characters don’t seem to matter anymore, albeit they never did, but the film indicated we would have some sort of development in some way.

42 minutes in: worst motivational speech. Ever.

The film has started to follow the predictable tropes of the genre. We do get a glimpse of the killer, and hints towards something supernatural happening. I should probably put here that I am going to be spoiling the film, so read with caution.

They whole “students find their way in dire circumstances” is kind of crap and comes a little late here. Of course, the one we want to punish for her sexuality remains awful throughout.

Our killer, who has no discernible motivation, used a sharp stick to kill his victims. This seems a little lazy to me.

Am I stupid for watching this?

I wanted this to be a funnier film to review. This film is absolute trash. I think we should make kids watch it when they are in detention. Delinquency would drop.

I was wanting to have a long diatribe at the end here about how lazily this is framed and that no wonder my younger students don’t seem to like horror as much, but I’m just ready for a nap.

Not funny. Not scary.