Let’s get some therapy in the woods. 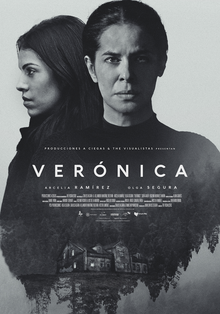 Veronica is a Spanish-language psychological thriller. Do not mistake this for another film (also named Veronica)—this one is directed by Carlos Algara and Alejandro Martinez-Beltran.

We follow a reclusive psychologist (Arcelia Ramirez) who hesitantly accepts a new patient (it seems she had quit the practice) from an old mentor. The new patient, Veronica (Olga Segura) is standoffish, smart, and skeptical of the psychological process. As their therapy begins it is unclear to who is analyzing who—and it seems both women have something hidden.

The film is gorgeously shot in black and white. The cinematography is amazing throughout. Simply put, this is an excellent looking film. The contained setting (a cabin in the woods) comes to life through excellent framing and lighting. The acting is sharp, and the entire film permeates tension.

The film is a single-location story, so it will test the patience of some viewers, but those who stick with it will have a well-crafted film to enjoy. It is hard to talk about the plot as I do not want to accidentally give anything away. There is a twist (as is the norm in psychological thrillers) and it perhaps isn’t the best one, but it is at least interested. This is the sort of film I think folks will like after they digest it for a day or two.

I guess I’m doing a short one. This is the type of film you will want to discuss (good thing my dumbass watched it alone) and there are a lot of themes present here that are worth exploring. For those looking for a moody psychological thriller—this one is a good place to look. Worth a watch.