We Have Always Lived in the Castle (2019) Film Review 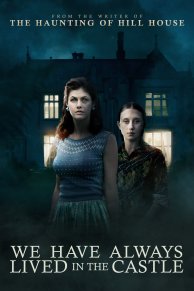 We Have Always Lived in the Castle is based on a book, but as with everything in this blog: the book does not matter.

I wasn’t sure what I expected when I started this movie, but it certainly isn’t the gothic horror Amazon seems to indicate. What we have here is a period drama about two sisters struggling to live in a harsh and hateful town. We have more a discussion of cruelty, justice, and place in the world than any sort of horror.

The film chooses to be indirect with many of its themes, and I think this will be the sticking point for a lot of viewers. I appreciate what the film tried to do, but I feel like there was something missing in the execution.

We do have strong performances by our two leads. Merricat (Taissa Farmiga) and Constance (Alexandra Daddario) are both unsocialized and their awkwardness adds to the indirectness of the film. Both do a great job, and their uncle Julian (Crispin Glover) adds a level of eccentrics to the scenes that make the whole thing a little odd.

When their cousin Charles arrives and tries to woo Constance away from her home Merricat becomes convinced he is up to no good. She must convince Constance before he is able to manipulate her sister away.

A major theme is how women aren’t allowed to fight back. The town hates Constance for thinking she may have poisoned her father, but the town also hated her father, and now they hate her. They also hate her sister. The town is full of assholes. The town is too asshole-ish, in my opinion, the narrative forces a black and white perspective when the entire film seems more concerned with shades of grey.

I feel like there is a lot of options for analysis in this movie, but as far as a viewing experience it is a little stilted. The narrative arc, of sisters being slowly pushed out by the greed and hatred of others, comes off as both fantastical and realistic—but the two don’t mesh well.

I think the film would be better used as something in a film studies class that could dig into every piece of symbolism. There is a lot to uncover here, but it just doesn’t hang together nicely.

In the end, this is the best-looking boring film I have seen in a while.

I’m sure this review is relatively lackluster, but aside from great sets and strong (but weird) characters, this one didn’t grab me at all.