Let’s see if Zombie got his groove back. 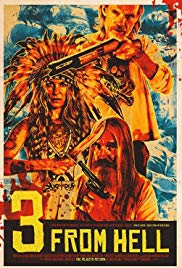 I like many of Rob Zombie’s films, which means this review will already be off putting to a lot of people. The carnival of depravity is certainly not for everyone. Zombie’s multi-genre horror shows sometimes work well and sometimes they don’t. I was apprehensive of this on after not enjoying Lords of Salem (I seem to be the only one who didn’t dig that one) and the uneven 31 (though Richard Brake was excellent).

3 From Hell starts right where we last left the Firefly clan. They miraculously survive the end shootout of The Devil’s Rejects and we are given a documentary-style opening that covers their ten years in prison. Captain Spaulding (the late great Sid Haig) is only briefly present due to Haig’s deteriorating health, but he still leaves his always delightfully sinister mark on the film.

We fast forward to Otis (Bill Moseley) being busted out with the help of his half-brother Winslow (Richard Brake). The two are a delightful murderous pair of brothers who seem to feed off one another. Now, they have the bust out Baby (Sheri Moon Zombie).

Baby is tormented by a corrupt warden (Jeff Daniel Phillips) and a vicious guard (Dee Wallace). Baby seems to have lost her mind in prison, but how much of it is an act isn’t entirely clear. Sherri adds more depth to the character this time around as we watch her struggle to maintain her identity while in constant isolation.

Otis and Winslow kidnap the warden’s family to force him to release Baby. What follows is a macabre and sinister smorgasbord of violence that eventually lands the new trio in Mexico where they are still being hunted by a dangerous gangster (Emilio Rivera) who wants vengeance on Otis for killing his father (Danny Trejo).

The plotting is relentless as our trio never get much of a break before things go haywire (usually due to their own insanity). We get to see them in a different light—don’t get me wrong, these three are not heroes. However, we see corruption, lies, and despicable behavior from everyone they encounter. There is an odd honesty in Otis’ desire to simply cause as much destruction as he can. Baby says early that she “Isn’t afraid of monsters” and this is possibly due to her and her brothers being labelled as such. Yet, it could mean that she is afraid of people, who prove themselves to be as equally chaotic under the right circumstances.

There is no forced moralizing here. We have a family with a twisted view of the world and they now must run if they want to survive. The film works so well because Zombie doesn’t try to backdoor in any broad social statements beyond what actually makes sense to the plot (a lesson many directors should take heed of).

This is Zombie’s most subdued outing with the trio, but somehow it makes it work better. As the chaos of society is starting to match the Fireflies they have to ask if any of it matters anymore. I quite enjoyed this one and would put it on the same pedestal as The Devil’s Rejects in many ways.

There are some shortcomings. Zombie has taken to directing violence so chaotically that some scenes are little more than visual gibberish. The worst incident of this is in the prison with Baby, but other scenes suffer from a similar issue. The other major flaw is the reliance on CGI gore. The practical effects are top-notch, but this actually makes the CGI look worse. I know this was probably a time and cost saving measure, but it just doesn’t look good and takes away from the visceral nature of the story.

I’m glad that Zombie has returned with a slam dunk. He seems less concerned with pushing boundaries here, and I think this allowed him to wallow in the darkened characters in a more organic way. Since the studio decided to only show this for a limited time (which was a fucking stupid decision) you’ll have to stream it, but I think it is worth a watch.