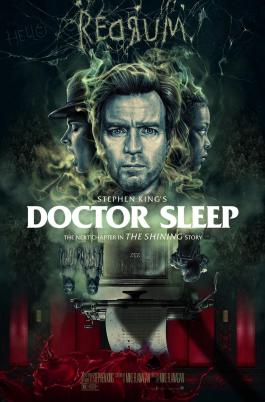 Doctor Sleep is probably the best film you haven’t seen this year. Despite being warmly received by critics and audiences, this one is likely to lose a lot of money. I’m not sure why—The Shining still has a following and this one has a solid story.

We follow the now adult Dan Torrance (Ewan McGregor) as he struggles with finding a place in the world. After the traumatic events at the Overlook Hotel, Dan is haunted, lost, and eventually turns to alcoholism. We see him hit rock bottom before travelling to a new town and meeting Billy (Cliff Curtis) and slowly beginning to put his life back together. Dan takes a job as a night steward at what appears to be hospice care, and we see how he becomes known as Dr. Sleep.

King is good at building whole communities, and Doctor Sleep embraces this idea well. We get to know all of the characters as the story unfolds across years and thousands of miles. The young Abra Stone (Kylliegh Curran) shows powers that rival (or perhaps surpass) Dan’s, and this draws the attention of Rose the Hat (Rebecca Ferguson) and her cohort who want to feed off children who have the Shine.

Dan is reluctant to get involved, but as Abra becomes in danger he must embrace who he is and work to help keep the young woman safe. What follows in the second and third acts is a suspenseful story that works quite well. There is a passion behind the scenes in every instance.

The show stealer is Rose, who is devilishly played by Ferguson. Her wickedness is on full display, and it is nice to have another cool villain in horror. This is not to say anyone did poorly—this is one of the better ensemble casts of the year.

The film also looks sharp. The care in costuming, framing, and sound all create an epic feel. There is something special about this film.

The previews show that Dan will return to Overlook, but I wanted to put the warning up anyway. The dedication to recreating the hotel is lovely, and it does feel like walking back in time. However, we end up with an odd friction between King’s Shining and Kubrick’s Shining that doesn’t always work. I think Mike Flanagan did an admirable job, but the final act feels sometimes out of place from the epic feeling of the rest of the story.

I wasn’t sure how I felt about the ending, but I enjoyed the story overall. Everyone felt real, and this moves Doctor Sleep well above most other horror stories. I’m not really sure why this one struggled to connect with audiences, but I think it will be worth checking out once it releases on home video.