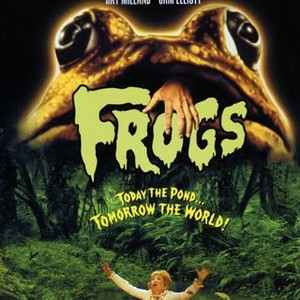 Frogs is an early eco-horror film that is in a similar vein to The Birds, but without the resounding success and afterlife of Hitchcock’s film. We decided to check out the film to have some fun watching a stupid movie. However, we ended up being a little surprised by this one.

We follow Pickett (Sam Elliott) as he is working on photographing water pollution when he meets the obnoxiously rich family led by Jason Crocket (Ray Milland). Something odd seems to be happening with the frogs, and the other animals, and now a worker is missing… something is afoot!

Pickett must work to discover what is happening and work to convince a grumpy old rich guy to leave his birthday party before it is too late. Danger! Action! Romance!

In all seriousness, the horror elements are terrible. I appreciate the practical effects and it is hilarious watching goofy lizards stumble around and be framed as intimidating. For its time, the use of animals is actually decent, but it is laughable to see now. The film simply isn’t scary. The croaking bullfrogs never serve as direct enough of a threat. Their involvement in the coming animal uprising seems to be through controlling or encouraging other animals. Snakes, spiders, and large lizards do more of the heavy lifting of killing individuals.

What is surprising about this movie is how relevant the story feels today. The rich are cold, distant, and mistreat their workers—whom are mostly African Americans. The environment is of little concern and is framed as the right of man. Class distinctions are present, as is patriarchal fear.

Seriously, this film could be remade today with basically the exact same script and it would fit. I’m not sure if the writers here were ahead of their time or if things have simply not changed in nearly fifty years. Eco-horror is weird in that regard, it hasn’t had to evolve because society hasn’t.

Another refreshing aspect of this film is that Karen (Joan Van Ark) is the one pursuing Pickett, and the oversexed and sleazy aspects of horror that plague the genre are simply not here. We also have an interracial couple that is allowed to make some pointed criticisms.

While there is a lot going right in the ideas of this movie, it isn’t that great of a watch. The scary moments are laughable, and the pacing is terrible. Technical issues exist but are more in line with the period than a skill deficit. I liked things about this movie quite a bit. Young filmmakers may want to consider examining this one as it presents eco-horror in a significantly less pretentious (and stupid) way as say The Happening did.

I’d only recommend this for fans of bad 70s horror or people wanting to research eco-horror. Also, if you’re a Sam Elliott fan this could be okay.