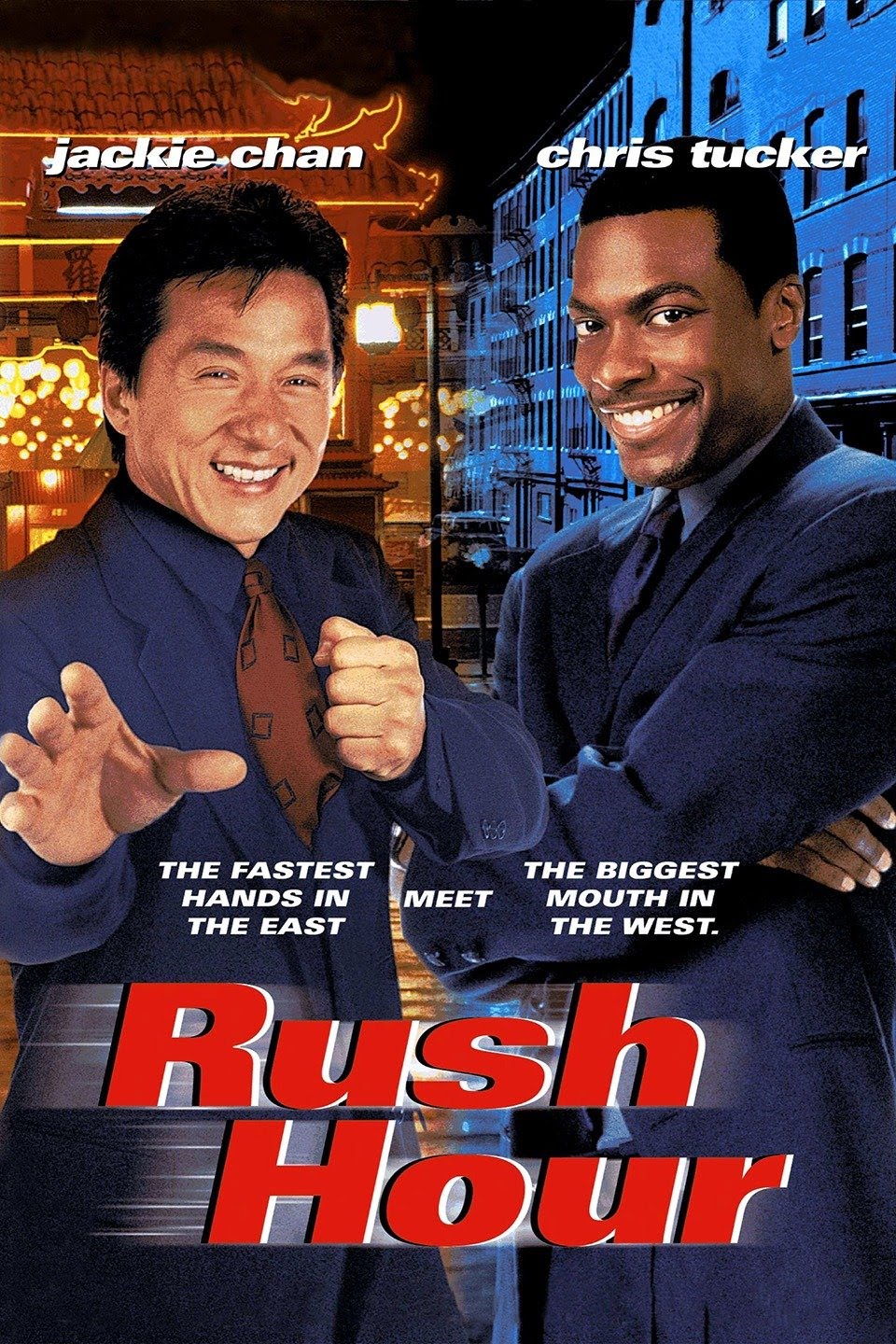 Let’s wipe ourselves off.

Rush Hour, as a franchise, somewhat marks an end to the buddy-cop or action/comedy genre. While other films have released since the closing of the Rush Hour trilogy, none seem to have the same staying power as this one does.

We follow Detective Lee (Jackie Chan) and Detective Carter (Chris Tucker) as the two are forced to work with one another after the daughter of Chinese Consul Han (Tzi Ma) is kidnapped by a brutal Hong Kong crime lord named Juntao (Tom Wilkinson) in California. Our detectives are opposites, with motor-mouth Carter and often reserved Lee. The two have to figure out who is behind the kidnapping in time to save Soo Yung (Julia Hsu) and stay ahead of the FBI that is stonewalling them from the investigation.

If the synopsis sounds familiar to most buddy-cop movies that is because it is similar. The narrative is fairly derivative in plot to most other cop dramas. We have our trouble making cop teamed with a more stoic partner, but both recognize they have to bend the rules to save the day. What differentiates this one is that absurd Carter and his non-stop banter mixed with Lee’s fantastic martial arts and stunt work. Jackie Chan is one of the most impressive physical performers ever in my opinion. The odd couple pairing works quite well here.

It is strange to rewatch this movie some 23-years after release date. I remember seeing this with an old friend at the mall theater when it released. We loved it then, and to a large extent I love it now. Yes, the humor is a bit rougher than we might expect today.

For me, comedy ages about as well as a jug of milk left in the garage. I think this is why comedy is so damn hard to write. What is funny now might fall flat in a short time. I don’t want to go into the plethora of reasons why people think this is the case (because none of the arguments seem to accept that we just evolve as societies). However, I do wonder if someone watched this now without the rose-colored glasses of nostalgia would think of it.

Racial humor is a tough thing to pull off. It works in this one as the film seems to be aware of the stereotypes and works to undermine them. How successful it is will ultimately be up to you, but for me this film does a lot more right than wrong. Further, it is nice to see a movie (released in 1998 no less) with such an Asian-forward cast. Yes, we get jokes about Asian culture, but we also see Lee as an honorable and brave man. Han is shown as a thoughtful, considerate, and loving father who also excels in his professional life.

It is also interesting to see a pre-9/11 film. The world simply feels different here. Part of the simplicity is due to us ignoring problems, but other aspects of it are due to timing.

Overall, the film is a well-paced and humorous action flick. I still laugh at several of the jokes and still enjoy watching Jackie Chan and Chris Tucker bicker. I think it this one represents a high bar of comedy/action from the 1990s.

The elephant in the room with this film is the director. I weighed whether to bring up Ratner in this review or wait until we hit Rush Hour 3. I figure now is the best time to talk about what an asshole the director is (or allegedly is?). For those who don’t know, Brett Ratner has been accused of sexual harassment and assault by more than one previous actress. I don’t know what the legal conclusions of these processes have been, but the man has become toxic in Hollywood.

I know a lot of folks who will blacklist films made by an abuser. It is up to the individual to choose whether or not to do so. The whole art from artist discussion is important but it also comes down to how we choose to spend our money. This blog often skips movies made by abusers. The way I see it is that there are too many other options to watch. While we’re not the biggest blog (or even a big one in audience size) reviewing these films does give them free advertising. What makes Rush Hour weird is that we already owned the trilogy. I don’t watch these movies for Ratner, but for Tucker and Chan.

What are your thoughts? How do you think critics should proceed in these cases?