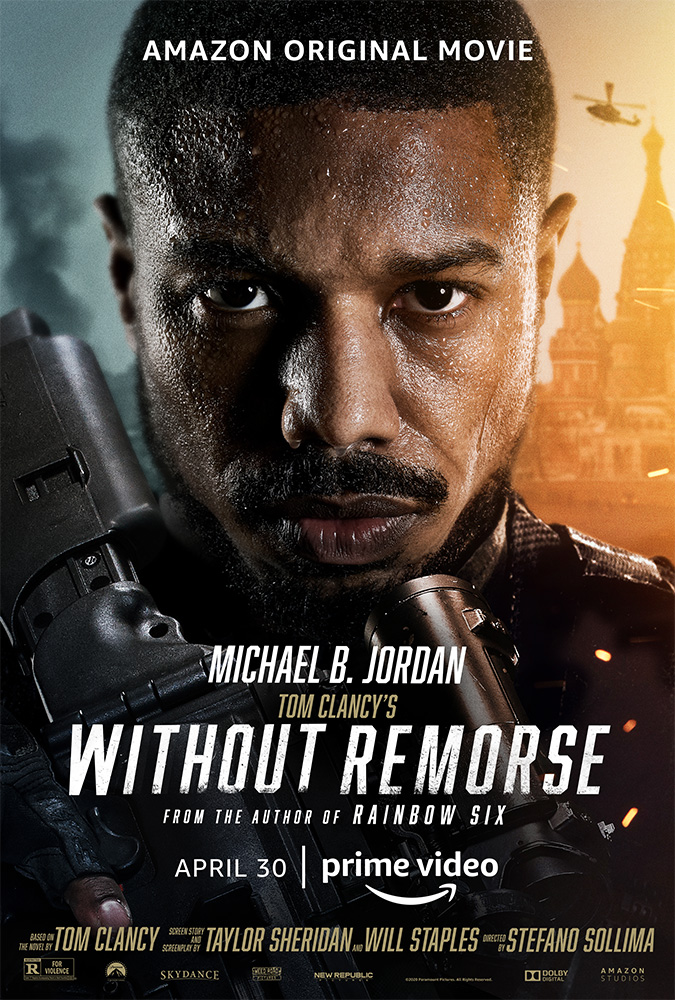 Without Remorse is the new attempt at another Tom Clancy franchise that follows John Kelly (Michael B. Jordan) who seeks vengeance for his murdered family. After an op goes weird in Aleppo, members of the seal team are hunted down. The killers don’t kill John but get his wife and unborn child. Now, John must go outside normal rules of convention to get justice.

He seems to only trust his friend/commander Karen (Jodie Turner-Smith) and both are suspicious of dickhead CIA agent Robert (Jamie Bell). With the help of Secretary Clay (Guy Pearce), John is given his chance to capture the assassin who fled the scene.

We have ourselves another action film where the driving motivator is that the killers went to the wrong house and wronged the wrong man. We’ve seen this before, a lot, and to enter into the revenge genre a film needs to add something new. What does this one do? Adds Cold War anxiety and military fetishism. Is that enough to make a good film? Nope.

While this film does a lot wrong, I thought I would start with what it does right. The whole thing feels like an exercise in competency. Writer Taylor Sheridan usually writes good characters, and we do have some interesting folks here, but they don’t have the same depth. Director Stefan Sollima (who did Sicario 2) knows how to make a scene work. The film looks fine, paces well, and has some impressive set pieces. The whole thing looks like a good movie, which is weird. I know these compliments might seem backhanded, but I don’t mean them to be. There is a technical competence that means while this movie has a lot of issues it is also serviceable enough to where it will receive mixed to positive reviews.

The problem with this movie is that scratching at anything, even a little, ends up revealing deeper issues. I imagine this film is more liked by folks who are polled right after watching it compared to folks to answer a question the next day.

The narrative has too many flaws to effectively capture the viewer. Further, with such a crowded genre it just can’t stand out. Unless you’re a die-hard fan of Clancy, there are just better options out there.

Click the next page if you’ve seen the movie and want to go into the deep dive.

Warning: this section contains spoilers for the movie. This is our deeper analysis.

A with most Tom Clancy narratives, even those highly adapted, we know there’s going to be layers of intrigue or twists. The problem with Without Remorse is that it wants to be smarter than it is. A lot of Clancy novels boil down to X must be stopped or Russia and the U.S. will go to war. This time, the threat is coming from within as Clay is trying to stir the pot to give Americans an enemy to unite against.

Clay’s speech that says that current social and political strife will end with an external threat seems tone deaf. I’m surprised they kept this one in given the current climate and just didn’t make it about money or something.

The problem is not only that the reasoning behind the plot is weak, but the road to the reasoning is needlessly complex. Robert Ritter’s character is designed to make us think he must be the villain. The telegraphing is so obvious that we correctly assumed Bell would be a good guy and Pearce the bad guy. Even if we were wrong, they were the only two options. Part of the problem with casting known (and criminally underused) actors in a move is that we all know one of them will be more than they appear.

Simply making Ritter’s character shifty instead of laughable may have helped. However, they’d also have to rewrite Clay to not be so obviously involved in more than he seems.

While the political intrigue is a bit slippy, the rationale for revenge is a joke. John’s wife Pam (Lauren London) gets about five minutes of screen time before she is murdered. In these scenes we see the two not having fun at a party, and her saying no to John’s advances (which she has to say no about ten times before he gives up and ditches her to go to the basement). The love is real.

In the last third of the film John starts referring to Pam as Pam rather than “his wife,” which I think was a way to humanize her in the final act. If the unborn child had a name, I don’t think it was mentioned. The acting between Jordan and London seems stiff. I honestly can’t blame them for not having much chemistry as their chemistry doesn’t matter. Her existence in this film is to die so he has a reason to go kill crazy. I never bought his emotional investment despite Jordan giving it his all. The script just did have room for this.

Flawed storytelling is one thing, but this film seems to go a step further in making interesting gestures without doing anything with them. One of the few poignant scenes is when Kelly is in physical therapy and we see a veteran so disabled he is struggling with a child’s puzzle. The weight and horror of war is present on the screen for about five seconds. Do we ever do anything with this image? Nope. It is just a throw away.

The same can be said for how the film chooses to not discuss race in any meaningful way. A fleeting comment by Kelly that the country “did not love them back” is supposed to be enough, I guess. It would have been better to just ignore this aspect than to give it this hollow lip service.

The whole project feels a bit soulless. Everything is technically working well, but there is no spark. I was not surprised to find out the whole thing is just an origin story for a new franchise. Hopefully, someday studios will focus on making a good stand-alone story first and not try to create something out of nothing. Though we all know this is an unlikely thing to occur.