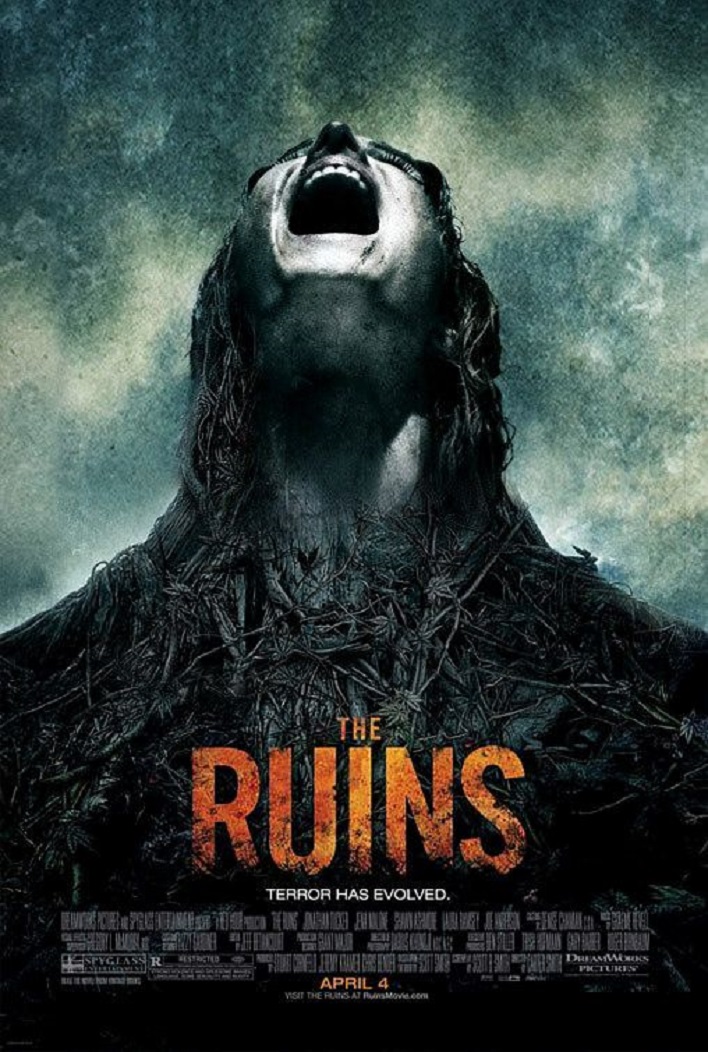 Honestly, I think the only reason I decided to watch this was to get Amazon to stop putting it as the first suggested film on my home page. Smart? No…

I watched this film when it first came out and remember thinking it had an interesting premise that is squandered by genre tropes and HOLY COW WHY IS IT SO DAMN DARK IN THIS MOVIE?

The Ruins follows a group of tourists who visit a cursed Mayan temple for reasons. Do you need to know the reasons? Nope. Do we care about these characters? Nope. Just imagine stereotypical upper-middle class kids in Mexico for some reason and just being annoying stereotypical upper-middle class kids. They decide to go to the ruins to get a little culture (instead of just complaining about the water in Mexico) before they leave.

The first third of movie lets us know that the main characters are drunk idiots who aren’t going to think anything through. We’re treated to poor writing and development with (I’m guessing) natural lighting, which makes the night scenes too dark. Interior scenes are too dark. Everything just seems thrown together.

The pacing and tone changes about 20 minutes in when we finally approach the temple. I think the filmmakers only cared about this part of the film. Everything else is built around the temple to make a reason for the temple to be able to kill people. The rhyme or reason of the characters being here doesn’t matter, and I don’t think it mattered to the creators of the film.

Locals try to stop them from going to the temple (by threatening and yelling at them), so obviously they run to the top for safety. Remember kids, Mexico is scary. I think that’s what the film wants us to know.

I know I’m dumping pretty hard on this one, but the whole setup is so lazy. We are about a third of the way through the running time before the drama of the film begins. At this point, I was so bored and tired of the unneeded character tensions and just not caring about the characters to be revitalized as a viewer once things start happening.

We end up with an infection like curse that does manifest in interesting ways. The main idea behind what is happening is cool. I like the general idea here. However, we still end up watching a bunch of morons get infected, so the stakes aren’t particularly high.

The Ruins came out when the gorier a horror movie was the more hype it generated. The lesson of gore being meaningless if we aren’t connected to the characters is one that has been ignored by horror creators forever. We end up watching people yell at each other for 90 minutes and have occasional gore (where the yelling becomes screaming). I’m not sure why these movies generate as much buzz as they do because they are simply boring.

I’ve noticed Youtube videos that just show the kills in these subpar narratives, and I honestly believe these videos give audiences what they want. The attention to detail during the bloody parts is markedly improved over the narrative slog. Why not just release ten-minute gore fests? Honestly, isn’t that all the movie really is? It is strange to see a narrative constructed around how they wanted people to die. “Hey this would be cool, right?” “Sure, let’s add 80 minutes of nonsense to stretch it out to the accepted and expected running time. There isn’t enough narrative meat here for a feature length film.

Maybe creators who want to make this sort of film should band together and make anthology pictures. At least in those you don’t feel like your time has been wasted as much.

Currently, The Ruins free on Prime, so if you want to watch a relic of the corporate horror tropes that plagued the early 2000s, have at it. Can’t wait to see what is suggested for a watch next!