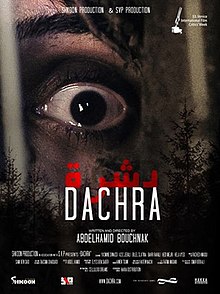 Dachra may be the first Tunisian horror film we’ve done here on the blog. We follow three college journalists who choose to investigate a strange patient at a hospital where deeper mysteries begin to unfold. However, not all seems to be normal for our investigators before they even begin. Our lead, Yasmine, has strange and demonic dreams before even venturing out. Will the film answer all these questions or leave us hanging?

A couple weird things in the design of the film are a bit distracting. Character presentation seems to be following the rule of thirds, so we end up with most of the screen empty or looking at the background. This isn’t so much a deal breaker, but it is distracting sometimes. Why they chose to frame nearly every scene this way is beyond me.

Second, the lighting is a major issue in this film. I am guessing this is due more to budgetary issues, but we have too many scenes that are too dark. The deliberate filming doesn’t work in these instances. A bummer that will hopefully be corrected in future efforts from this team.

Last, our characters don’t seem to like each other very much. The bickering seems too meanspirited to be casual among friends. It isn’t as bad as numerous other films, but it still creates needless tension and drags the whole thing down.

The tension of the film works well. We have an inherent creep factor that never really lets up. The problem I have is that a lot of the decisions the characters make aren’t the smartest. Our trio finds a strange and isolated village during their investigation, and no one is determined enough to leave. Yasmine wants to, but her two idiot friends simply seem uninterested, despite there clearly being something strange in the village.

Further, Yasmine’s over-protective grandfather worries sick about her, so she does not want to be away from him. It is weird that her male friends seem to ignore her needs. It might be realistic, but it is frustrating as they seem to follow her lead in other ways.

The film relies on an inherent creepiness to propel the mystery. The problem is that our characters just end up complaining and yelling at each other despite the fact something is clearly wrong in the village. Horror movies can only be as scary as their characters are smart. This one simply can’t be scary as the characters are increasingly dumber as the story goes on.

What starts as an interesting premise devolves into stupidity to keep the obvious mystery still lingering. Unfortunately, this one could have been great. A stylistic success but a narrative misfire. When the big reveal occurs the most you’ll be able to muster is a “duh.” What should have been the best part of the movie just becomes a slog. I was impatiently waiting for the ending.

Twists that rely on red herrings and fake out scenes are bad twists. Boo.