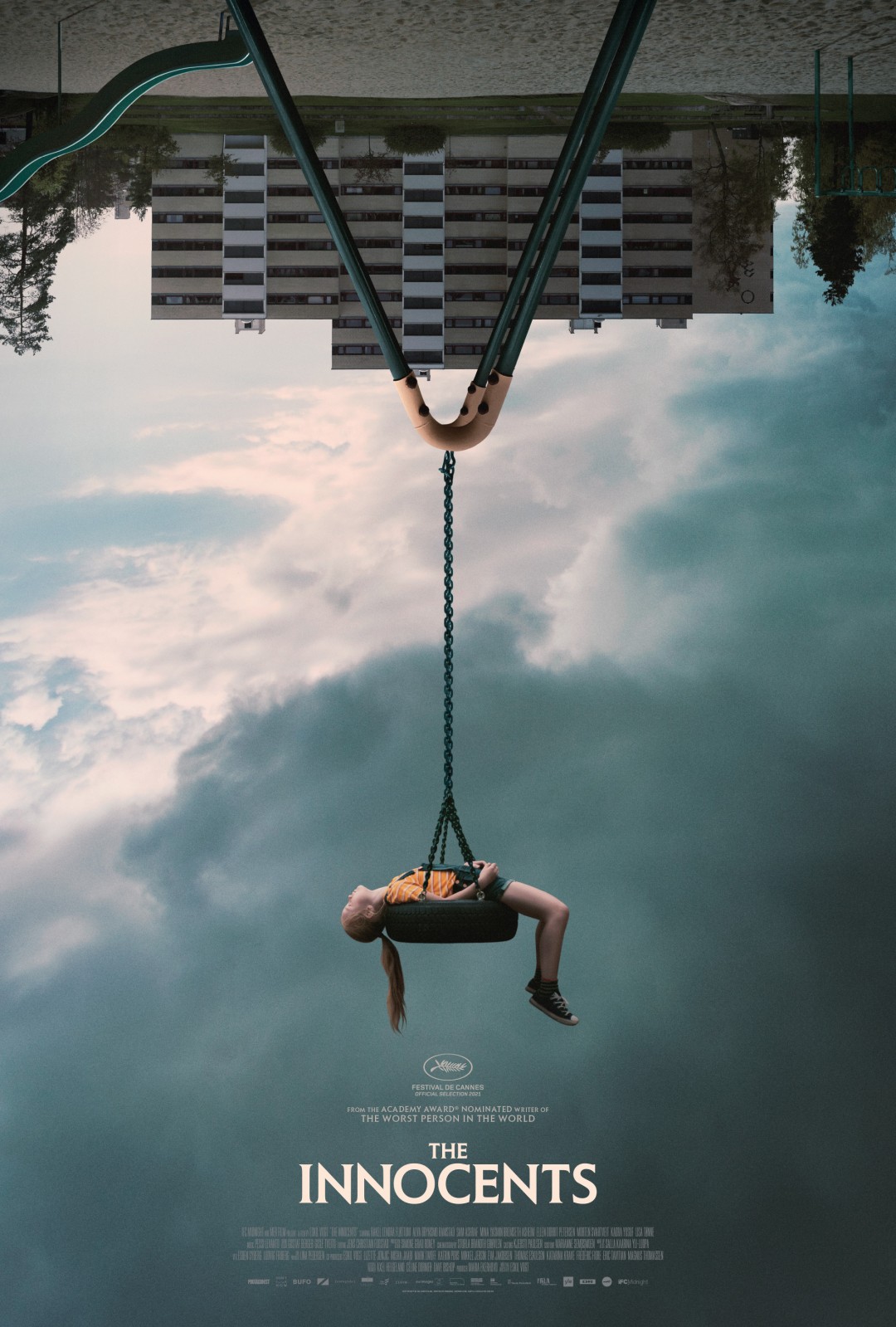 The Innocents is a Scandinavian horror film that follows Ida (Rakel Lenora Flottum) as her family moves her to a new housing complex since her father has a new job. She is mean to her autistic sister Anna (Alva Brynsmo Ramstad) and is overall cruel to those around her.

Ida is basically ignored by her parents as Anna takes up much more of their attention. Her jealousy, and unhealthy coping mechanisms, make her a disturbing kid. Once she meets Ben (Sam Ashraf) the two torture a cat and eventually kill it. Yeah, kids are bummers.

Ben shows Ida something else though, he is telekinetic. His burgeoning powers start as little more than tricks but begin to evolve into more powerful forms. Another neighbor, Aisha (Mina Yasmin Bremseth Asheim) represents a purer soul, and with her own powers can communicate with Anna. Ida is somewhat torn between the two camps as the group of friends forms, then dissolves.

The directing is interesting and thorough. We spent a lot of time with the kids (almost all of it actually) and there is a disconnect between what the kids are doing and what the consequences are. The performances all around in this film are simply stunning. Excellent work from everyone involved. Asheim and Ashraf are show stealers, but that is not to say the others aren’t excellent.

The premise of the film is part horror with killer kids, part superhero origin (kind of), and part contemplation on ethical responsibility. A child may not understand what they are doing. Imagine yourself at eight, if you had the power to kill with your mind do you think you would have? Would you have regretted it?

I imagine the slow pacing of the film will detract some viewers. The film deserves its running time, but it doesn’t use the time in the best way always. More of a look into the internal conflicts with Ida would have been nice. There just needed to be a bit more development for the final act to pay off in the way they wanted it to.

I liked the film but did not love it. We talked about it quite a bit after and couldn’t fully determine what the film was missing. I think more development would help. That, or reducing the film by about twenty minutes may give it a leaner narrative.

The film dances around a lot of new ideas while dabbling in familiar tropes. There’s something to be said about such a bold, and frankly ugly, examination of superpowers, but it could have gone farther. I don’t want to sound like I am picking on the film. It is worth seeing, but there are some frustrating elements that are hard to ignore.

We get more of a reason why some of the parents seem absentee, but not others. Once you start pulling on the threads of any horror movie that relies on children being unsupervised for hours at a time you’ll run into problems. Likewise, Ida clearly despises her sister at the beginning of the film, yet her parents consistently pawn Anna off on Ida to watch. The whole thing is a bit head scratching. Then, the indignance they show Ida when Anna gets hurt is a bit weird.

Small moments like that will pull you out a bit. However, the mesmerizing performances by the kids will pull you right back in. I think it is a solid movie through and through and hope we see more of the cast and crew in the future.

This is the type of film that may end up on the best of the year list. Check it out.