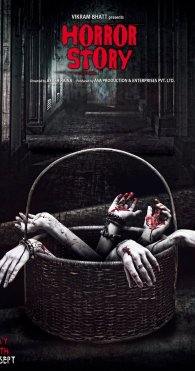 Horror Story is an Indian horror film, which is something I did not know when I selected this movie. I enjoy watching international horror to see the differences and similarities. As of late, there seems to be more in common with the genre across nations, and that may or may not be a bad thing.

Seven thirty-somethings are supposed to be recently graduated/current college students in this film. It opens with a pretty expected event where we can see how vapid and obnoxious all of the people are. After partying in celebration of their friend who is leaving the country for a while, they decide to visit a supposedly haunted hotel—because why not?

I can generously say the film does a decent job of setting up the story. The haunted Hotel Grandiose is an interesting setting, and the film does a good job making it look like it has been shut down for a while. The uber chic style of the main characters makes them look completely out of place and unrealistic for who they are supposed to be. The characters don’t interact with the setting in meaningful ways. There is simply too much shouting, movement, and not enough thought in what they do.

Once the hotel is clearly haunted (well, actually once the ghosts get violent) the group flips out, which might be realistic, but in the chaos, any suspense the audience might feel is taken away. Pro tip: if you are waiting in the doorway for your friend to check out spooky shit, maybe block the door?

The film’s music is way over the top, but I have complained about that in so many recent reviews I don’t feel like rehashing it here. These directors need to learn to turn down the volume and let the atmosphere breath.

Oddly, the over-the-top music, fashion, and personalities makes the film feel like a romp through a haunted house (well, hotel in this instance). There is a level of fun to each of the scenes, and the characters do talk things out, so we can see their plans. The characters overact, but for some reason it kind of works here. Despite the serious flaws, I did find myself amused while watching the movie.

The movie isn’t great. There isn’t much originality, and the mystery is predictable. However, if you are looking for a cheap horror film that is at best mildly tense, this might fill your needs. I think this would be a good horror show for people who do not watch a lot of horror. Veterans of the genre will be entertained but not scared. Honestly, you will probably laugh at it more than be scared. It is entertaining in a completely cheesy way. 4/10.