I enjoyed going through my cancer treatment more than this film. 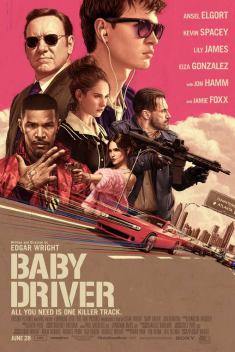 Baby Driver is a comedy/action film about a young man named Baby (Ansel Elgort)  who drives for a criminal mastermind (Kevin Spacey), but doesn’t want to. Yep, we have another one of those stupid and cliché-ridden tales about the criminal with a heart of gold. I thought the previews of this film looked like stinky garbage, but gave the film a chance because Edgar Wright usually makes good movies. He failed in about every regard in this one, and I simply cannot understand why this movie has positive reviews. I don’t always agree with critics, but I am surprised that a film this celebrated can be a contender for my worst of 2017.

Wright’s previous films have included colorful and believable characters. Anyone watching the Cornetto Trilogy will feel a connection to at least one of the characters, and this is because they are all sharply written. Our first characters in Baby Driver fail to rise to the occasion. We are quickly introduced to Jon Bernthal, who once again proves he can only play one dimensional assholes who have no worth to a script or society. I am not even going to bother looking the character’s name up, because it is just Bernthal playing the same stupid role he plays in every other film. His presence drags the movie into the sewer more or less immediately.

The titular Baby is likewise uninteresting. Due to a childhood accident, Baby has hearing problems, so he listens to music all the time. The other characters make a big deal out of his name and the fact that he listens to music. The name thing is particularly stupid, our other criminals go by: Darling, Doc, Griff, Bats, and Buddy. With all of these stupid names it is particularly annoying that anyone would give a squeaky cat fart about someone being called Baby. Apparently, Bats is an acceptable and respectable name, but Baby, no, no way—that crosses the fucking line.

The soundtrack features a bunch of crappy pop music that anyone over the age of about 14 will probably not care about (alternatively, they will not be aware of the older classics forced into the movie out of place). I know the big gimmick of this film is that the music lines up with the action—isn’t that cool? Don’t you all think that lining up music and action is so unique and revolutionary?? I mean, it isn’t like music videos have been doing the same damn thing for decades now.

Jamie Foxx uses this film to continue his quest in having his Oscar retroactively taken back. His character is supposed to be funny/cool or something, but he is such a boring sociopath that there is simply nothing there. He isn’t scary at all, and I truly think they told him to act in such an obnoxious way that the entire audience will try eating their face to escape his character. Jon Hamm’s character starts out a little more believable, but decisions in the final act send his at least tolerable character into a vapid and stupid direction.

The film is a heist/driving movie that is neither funny nor action packed. If Wright was trying to create the same self-aware love letter to a genre as he has in the past, he failed miserably. The films gleefully steals ideas and becomes so focused on being cool that it overlooks minor things like pacing and plot. My dog had to go outside and take a dump while were watching the movie (not sure why I need to emphasize the dumping part), and I paused the film to see there was 26 minutes left, I was genuinely saddened that I had to suffer through any more of this drivel. In every way this film is the lesser copy of greater originals.

I have blasted the whole “criminal who doesn’t want to be a criminal” trope before, but this one might actually be the most annoying. Baby is not redeemable, he is an accomplice and participant in numerous murders, thefts, and other crimes. Feeling bad about something after the fact doesn’t serve as an absolving of guilt. Baby is a shallow and gimmicky character who is shoehorned into situations designed to garner audience sympathy rather than actually develop him. I guess not having character development is the new edgy thing in films.

I genuinely think this movie did nothing right. Sitting through a two-hour comedy only to have one half-hearted chuckle is about the best I got out of it. However, there were plenty of things that pissed me off. The number one being the writing of Debora (Lily James). Debora falls for Baby for reasons(?) that aren’t entirely clear. We see the two of them go out a couple times, but they are both immediately madly in love with one another. I am not kidding, this film might have the laziest romance story I have ever seen. Crappy romance is a problem, but not that huge of a deal in a film that is already so bad. What bothers me is that Debora gives up her life for Baby for absolutely no reason. She is willing to wait—no matter how long for him to return. She is also willing to give up her entire life for him. She is not a full person, but only an object of desire and a prop to be used. I cannot believe how shitty the writing is around her character. I consider this objectively bad writing, and if I was shopping a story that contained such an obvious sexy lamp I would force a rewrite.

The movie tries to convince you it is smart and new only to serve as a smokescreen for the hollow and contrived product you will actually get. I had more fun getting a tumor cut out of my forehead than I did watching this movie. 2/10