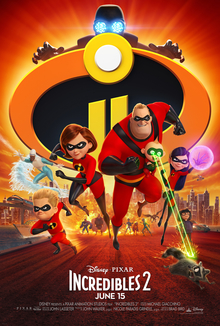 The original Incredibles came out fourteen years ago and this film picks up right where that one ends. For whatever reason, the cast makes an announcement at the beginning that it took them so long to make a sequel because they wanted to get it right and make sure it was perfect. I am not sure if starting a film with apologetics is the wisest idea, particularly when the sequel is more or less the same movie as a the first.

What probably really happened is that sequels and franchises weren’t as popular fourteen years ago, so it was shelved and now that Disney is just going to rehash everything until the end of time, this narrative gets a turn. Another major change is that superhero films weren’t being produced at an absurd pace. The Incredibles offered a fresh and fun look at the genre, and with some Pixar films, it provided a decent experience for kids and adults.

Incredibles 2 just doesn’t take off in meaningful ways. We have a meandering and predictable plot, an overlong and over talked story, and not nearly enough humor. Sure, there are some funny moments, particularly with the baby, but there needed to be more. I can already hear some say that this is a kidss film, so we shouldn’t judge too harshly. Fine, but then we have to accept that Pixar is just a kids’ film production studio, which seems contrary to how most people view the company. Pixar can do good work, both UP and Wall-E are interesting films, but this does not mean they always strike gold.

The narrative follows our family of superheroes, who are still illegal and now Helen/Elastagirl is approached by a wealthy businessman in an effort to change public opinion. Helen takes the offer and leaves husband Bob to deal with the family, which he fails at. We have another dad is a moron movie, and I am tired of these. Women should not be forced to be the primary parent, but I am not certain showing fathers as completely inept is the best way to approach this issue. Showing Helen as the better superhero (she breaks less stuff) is great, but the narrative divide forced all of the humor onto Bob, and made Helen’s story fairly boilerplate superhero fare.

We have a superhero film with a bit of comedy instead of an outright comedic film. It isn’t a complete failure, but the nearly two hour running time should have been cropped a bit. In our packed theater it was clear many were checking their watches. The predictability of the entire thing makes the lead in to these set-piece moments feel too bloated. We have seen this movie before, and perhaps numerous times, so moving a little quicker would have made it a better experience.

Like an idiot, I happened upon the New Yorker review where the critic was horny for Helen—seriously. I must admit, this may have impacted my viewing experience because the whole thing felt a little weird. Are we really sexualizing a cartoon character (the film is said to be a titillating as 50 Shades of Stupid—or whatever those movies are called)? I am severely disappointed in this sort of review, which seems to be more interested in being edgy and provocative than adding anything to the conversation. Further, this sort of “boy isn’t that cartoon character hot” undermines the point the film was trying to make.

I am annoyed with the meme that this character has become, but I am also disappointed in Disney’s inability to do anything more than a half measure. The corporation seems to have a hesitancy to actually make a point directly, and while it was positive to show Elastagirl as the principle hero, they made the parts without her the more enjoyable and memorable. Apparently, female superheroes can’t be competent and funny at the same time.

As we have seemed to all join hands and take a giant step backward in gender equality in this country, the film should have made these points more directly. Reviewers should not sexualize everything—and the sad fact is that this should have been predicted. We have had one female-led superhero film recently, and who knows when the next one will be. Insecure idiots will always thumb their noses at anything resembling equal representation (if you’re brave, go ahead and google reactions to Battlefield 5, which dares to have a female protagonist). Congratulations New Yorker, you are now officially part of the problem.

Back to the film, it is a working narrative on many levels. The characters are likable, the villains are shifty, and the action scenes are, well, action packed. For me, there are several structural issues that make this one a little less memorable than other Pixar outings, but it isn’t an outright failure, either. It has many of the pieces for a great film, and some of the individual scenes (one involving a glass of water) actually made me laugh out loud. Put together though, the film doesn’t quite stick the landing.

Will there be an Indredibles 3? Probably. I don’t think the franchise is doomed to failure, and the introduction of new characters might be the type of adrenaline shot to get this one off the ground. However, what will differentiate this from the 450th marvel film? I know a lot of people who were absurdly excited for this one, and I do think for those wanting another fix of Parr family, this film will mostly satisfy you. For people indifferent or not a major fan of the first, this one could probably be ignored. 5/10