The one where Dr. Grant dreams of a talking raptor. 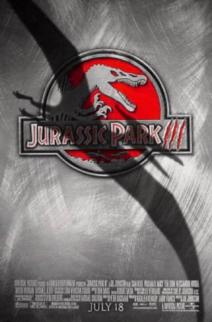 Jurassic Park III is the first entry without Steven Spielberg at the director’s helm, and many point to this one as the downfall of the series. The Lost World isn’t exactly a bad film, but where the series was going to go wasn’t entirely clear. It should be no one’s surprise that once again we go back to the island.

Sam Neill returns as Dr. Alan Grant, and he remains a likable character. This time around, he is tricked into going by Paul and Amanda Kirby (William H. Macy and Tea Leoni) who are looking for their missing son. It is revealed quickly that the Kirby’s are frauds, and the money they promised Grant and his graduate student Billy (Alessandro Nivola) doesn’t actually exist. It is also quickly revealed that the Kirby’s are actually divorced, and their son Eric was traveling with Amanda’s new boyfriend.

Does that sound a little too complex for what should be a simple setup? The Jurassic series has been overcooking their setups for a while, but this one adds so much unneeded (and irrelevant) crap that it drags down the film. The Kirby’s also hire a few (fake) mercenaries, but they are killed off so predictably that their existence has no point. I think they decided there had to be a body count, so let’s bring in some useless people to kill off. It might have worked if it wasn’t so painfully obvious.

The narrative has a lot of problems, but it does some things right. I am in the extreme minority here, but I think this film comes closer to capturing the feel of the first film more than any of the other sequels. There is no stupid corporate villain, no overarching (and conflicted) message, instead it is just people trying to survive. I think in these ways this film actually does a decent job. The dinosaurs are aggressive and relentless, and it seems that the odds are against our rag tag group.

Unfortunately, for every step in the right direction there is another going the wrong way. Amanda’s sheer indifference to finding her boyfriend’s body is actually a little concerning—is she really a serial killer? I think yes (not really). However, the lack of emotional connection between Amanda and the boyfriend makes the rekindling of her and Paul’s relationship seem in bad taste. The character interactions just don’t make a ton of sense here.

We also have to upgrade the dinosaurs. Instead of a T-Rex we get a big crocodile looking one with a big flipper on its back. I recognize here that I should probably look up the correct name, but I’m not going to. We watch this bad boy kill a T-Rex early on, and I suppose this establishes it as a new threat. The raptors are more present here than in The Lost World, and I think this is wise. The raptor scenes (in all the films) seem to work a bit better than just having everyone run from a towering beast.

Everything looks fine. The CGI is holding fairly well, the camera angles work, and the set pieces provide enough adrenaline for an afternoon action flick. It all feels a little stale though. There isn’t novelty here, and this is something that I think carries through even to the most recent release. Whatever the winning formula was for the first film, it seems lost now.

Perhaps the worst parts of this film are the decisions to make completely unbelievable decisions. The young boy, Eric, should not have been able to survive for eight weeks on the island. No one in the audience could possibly be surprised he did survive, but the stupidity of it is numbing. Worse still, I think the film fan out of money or something because every thread is wrapped up in less than ten minutes. The movie is working as a fine genre film—nothing special, but fun—and then it ends abruptly, and stupidly.

Having now watched all of the films again (although out of order) it is hard to know what to say about this series. The first one is great—I highly recommend it. The sequels just aren’t up to the same caliber narratively or magically. Honestly, all after the first can be skipped. 4/10