Let’s take a look at some Indonesian horror. 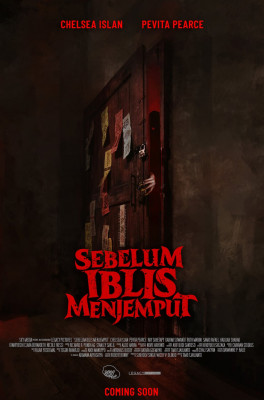 May The Devil Take You was one of my most-looked-forward-to films of 2018. Writer/director Timo Tjahjanto wrote the nearly perfect Killers, so I was pretty pumped about this one. Unfortunately, this one doesn’t quite live up to expectations.

Lesmana, a young father, sells his soul to an otherworldly force for material wealth. However, something seems to go wrong (years later) and his children are now being stalked by an evil spirit as he lays dying in a hospital bed.

Distant daughter Alfie (our primary protagonist) travels to his private retreat in the country (for reasons) and runs into her step-mother and step-siblings, who have come to dig around for money. Lesmana’s wealth has vanished overnight, and now his new family must find a new resource to pay for their lifestyle.

Alfie is the exact opposite of her step-sister Maya, and the two seem to hate each other. Step-brother Ruben is the only one who seems like a normal person, but the dynamic is so damaged it is hard to get too invested. Once everyone is inside, we start getting too many idiotic horror tropes. Perhaps the most frustrating is that this family is particularly stupid.

They open up the sealed cellar, watch a demon attack and possess the step-mom, and then just kind of dick off for a while. Alfie and Maya travel outside, Alfie returns alone (long story) and then they all doze off. Granted, these are only two examples (of probably about a dozen), but I hope to show how weird this movie is. We don’t have characters at all—we have somewhat scary situations that need a little bit of set-up. That is all the characters are-just props to move us from set piece to set piece.

What the poor decision making does is create a world that isn’t scary nor is it believable. Sorry folks, after a kid sees their mom attacked, head caved in, reanimated, and obviously demon possessed I doubt they will be sleeping that night (let alone the fact the film makes it seem about an hour later). I have decried annoying characters in horror movies for years, but dumb ones are just about as bad. Here we are more on the dumb end, but also the simply poorly directed end. More than once they just sit and stare (and pound listlessly on the wall) while something scary is happening. Honestly, they react to demons with the same emotional expression of someone watching their dog take a dump.

Some of the visuals are awesome, but the poor reactions take away from the excellent make-up and effects. There is a good movie here, but somewhere along the way we lose storytelling in favor of familiar shock-tropes.

Indonesia has become a powerhouse of filmmaking, and there are many talented people here. I guess a dud was going to be more or less inevitable, but it is still unfortunate to see. This one tries a little too hard to be Evil Dead, but wasn’t sure which version of evil dead that it wanted to be. Some sardonic humor would have helped a little but here. Alternatively, if they wanted to go for a gore fest (like the Evil Dead remake that I actually liked) they needed to up the ante a little bit.

It is odd, this review is already a little long, and I haven’t mentioned the inconsistent world, odd rule-making, tone shifts, genre shifts, poor character motivations, and a bloated running time. Honestly, this one is worth skipping.