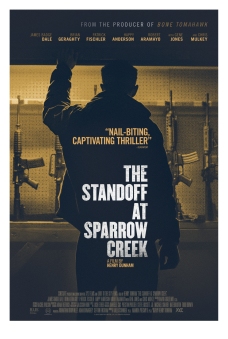 The Standoff at Sparrow Creek is the directorial debut of Henry Dunham and is a firecracker of a film.

We follow Gannon (James Badge Dale), an embittered ex-cop who joined a militia after leaving the force. One evening, he hears automatic gunfire in the distance and learns over his radio that a police officer’s funeral has been massacred by a lone gunman with an AR and IEDs. Gannon rushes to the militia’s headquarters (a lumbermill) to meet with the others and determine what should be done.

The police announce they believe the shooter to have been a militiaman, and the shooter also got away. As Gannon and the others rush to hide their weaponry, they realize one of their rifles is missing—along with body armor and grenades. The shooter is one of them, and they must find out who and turn them in before the police and national guard come and wipe them out.

Gannon is tasked with interrogating his fellow members, and the tension rises almost immediately. They are all potential suspects. We follow along as this film becomes a daring whodunit with always increasing strengths as the men begin to turn on one another.

The story is interesting, and it takes the subject matter seriously without being overly critical, praising, or didactic. We have a philosophical question: do the ends justify the means? One of the member’s daughter was raped and murdered while an undercover cop chose to do nothing. He wanted this cop killed—is that justice? Or, is this an example of homicidal mania? The film asks the questions and wants you as the viewer to answer them for yourself.

It is refreshing to see a film handling this sort of material that doesn’t insult your intelligence. These men are boastful, blustering, angry, and potentially dangerous—but they are still human. There are uncomfortable moments as we have to wonder who we are meant to root for here. Modern militia movements can vary from friends shooting on the weekend in preparation for a zombie apocalypse to anti-governmental groups planning domestic terrorism. These men want to eliminate the government as they feel society has failed them.

We see a sort of wounded masculinity within this film. They are meant to be strong, secure, and those who are the true good guys (at least in their mind), but the film pulls at these ideas and shows the inherent fragility in unstable subcultures.

The entire cast does excellent work. Dale is quickly becoming one to watch for me, but the supporting cast all does great work as well. The characters do not fall into standard tropes or clichés—and they react to each situation as though they actually have opinions and thoughts of their own.

Dunham proves to be a calm director. We have longer takes, small sets, and quiet scenes that allow the characters to interact with one another naturally. The entire film (aside from the opening) takes place in one location—to have it be this interesting says something powerful about the storytelling.

There are some potential logical gaps—particularly during the final sequence where it all comes together a little too cleanly. However, one could argue this is an indication of the predictability of people who are desperate and cornered. Others could argue it is a little easy of an ending in some ways (though you’ll be thinking about it long after).

I thoroughly enjoyed this one. If you’re looking for a film that wants you to consider heavy issues without easy answers this is a must see. Probably the best film of the year thus far for me.