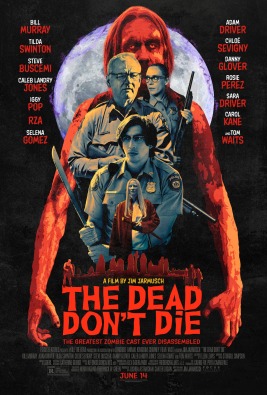 The Dead Don’t Die is the new (and over-hyped) zombie-comedy from Jim Jarmusch, who seems to be desperately trying to maintain his hipster cred with this flat pancake.

We follow Chief Cliff Robertson (Bill Murray) and Officer Ronnie Peterson (Adam Driver) as they patrol their small town before and during a zombie outbreak. There are numerous other characters in the film (many stars, too), but Robertson and Peterson are the only two who matter.

The film is an absolute failure as far as storytelling goes. Entire swathes of characters could be removed, and not only would it not effect the film, but no one would be the wiser to anything missing. We are introduced to some young kids at a juvenile detention facility, and they just kind of disappear… There is no point to their characters at all. Unfortunately, the same could be said for almost every side character in the film.

What we do have is a fragmented and honestly boring story where the jokes wear thin and the running time becomes an endurance test. Yes, I get the goddamn point that zombies are symbolic of consumerism. The joke is funny, but not the fiftieth time. There is also an air of supposed freshness around these ideas when the entire thing is simply derivative. Consumerism and mob mentalities being discussed in zombie films goes back to Romero. Fourth wall breaking crap has existed forever. Cramming in a silly UFO joke during a horrific event is something Silent Hill has done for years.

For all the hype, I can find nothing original here. Sure, we get some (lazy) anti-Trump jokes, but those just kind of hang to get a cheap laugh. How about we explore these themes more than just some one-liners? No? Okay. Let’s just follow Tom Waits as a homeless mountain man around and listen to him dress up simple observations.

I feel like this movie was written by drama majors who think they are cleverer than they are, and I think that is also who this film is trying to inspire. Throw enough shit at the wall and people will work themselves to death to find a deeper meaning. Sure, we could take the time to piece out the individual symbols and notice an anti-consumerism trend—and while that might be interesting, it won’t make the movie any better.

Deadpan humor can be fun, and some of the jokes will get a laugh, but the overall experience is just tiring. Granted, I may be the exception as one person laughed at literally every line in the film—I’m not being cute here, even innocuous lines like “hello” received a loud chortle.

I wanted more from this cast and the genre. Shaun of the Dead proved you can have a spoof with memorable characters and clever jokes. I found nothing clever or enjoyable about this film. Potentially the biggest disappointment of 2019.