Let’s set up some cameras. 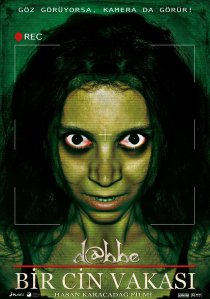 Of the five Dabbe films I have seen I enjoyed four of them, which might make this my favorite horror franchise by ratio. Don’t get me wrong, these aren’t amazing films, but they are a lot of fun.

What makes the series fresh is that it is an Islamic perspective on horror, so we get new types of demons and lore. While this aspect adds a new coat of paint, there isn’t anything really new here.

Bir Cin Vakasi is a carbon copy of Paranormal Activity. The two films are stunningly similar. While the PA series went downhill in time Dabbe seems to get better. While this is a clone, it is an enjoyable one.

However, just about all the issues with found footage are present here. What makes it more annoying here is that this one should have seen some of the problems with the genre and adjusted.

The biggest issue of all found footage is that no one seems to be willing to put the camera down. My child is in danger? Hold on, better grab the handheld for some clicks on Insta or whatever. As the danger gets more apparent this issue becomes more laughable.

Anyway, this time we follow a family who starts to record their house as the wife is sleepwalking. This terrorizes the daughter and annoys the husband. Why are the taping it? I’m not entirely sure. They talk at a couple points about sending some footage to a doctor… but nothing ever really comes of this.

And here we have our second major annoyance of found footage: no one bothers to watch the damn tapes. Okay, to be fair they eventually look at some of the stuff, but it seems like the only reason they are recording is a convenience for the film and not integral to the plot. What ends up happening is you’ll become increasingly frustrated by the stupidity and willful ignorance of the family in light of increasingly profound evidence.

What we end up with is a fun, sometimes interesting, and overall decent PA clone. It isn’t much more than that. Some minor tweaks to the story are nice, but nothing to write home about.

For those interested in the series, I would start with this one and then go to the newer releases.

Worth streaming if you’re a fan of the Paranormal Activity films.