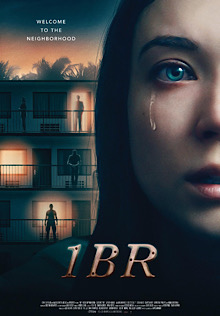 Every year there seems to be a horror movie that comes out an enthralls critics while getting middling to negative reviews from viewers. I think 1BR might be the ordained sacrifice for 2020.

We follow Sarah (Nicole Brydon Bloom) as she has moved to LA to start a new life. She finds herself a nice one-bedroom apartment where everything seems awesome. The people are oddly nice, and it soon becomes obvious things aren’t what they seem.

I’m not sure if the better term to describe this film would be boring or derivative—perhaps both. The twist is so obvious that I am not certain they needed to bother with the subterfuge at all. I suppose I should go ahead and put a spoiler warning here.

So, the community is a cult like structure that is trying to indoctrinate Sarah. They of course pull all the strings imaginable to make sure that Sarah is completely isolated and blah blah blah. The plot points the cult tries to make are so fucking stupid that it is hard to imagine. If you’ve never seen a movie about a cult before you might find this one interesting. If not, run.

As I watched I could not help but be reminded of better films focusing on similar themes of cults, identity, and programming. Nothing here is original. Everything is designed for maximum shock effect with no reasoning or thought behind it. Hey, let’s put a cat in the oven cause that will get a reaction.

It is funny to watch this movie right after Happy End—and infinitely better made story. Anyway, I had hinted that one thing that makes Haneke such a great director is he understands the idea of restraint to make things interesting and ultimately more complex. Here, the writers couldn’t help themselves but make everything so over the top that it just becomes a cartoon.

Nothing is scary about this movie because it goes so far outside the realm of realism. Social conditioning in cults can’t be forced (often) and can takes years to develop the type of loyalty they’re aiming for. I truly believe that no research was done in preparation for this film other than giving a cursory read about the Stanford Prison experiment.

I hated this movie for how shallow it is. You might hate it for this reason, but the stilted acting, poor dialogue, and terrible editing might make it a bad movie for you. How or why this one has gotten the buzz it has is beyond me. As I said above, if you’re not familiar with horror I think this one could be interesting. However, anyone who has seen a horror movie dealing with even slightly similar issues will see everything coming a mile away.

This is not a horror movie for horror fans.