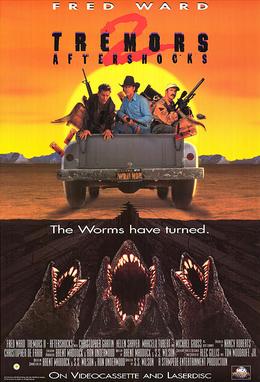 Tremors 2 follows Earl (Fred Ward) who is once again down on his luck. With his 15 minutes of fame used up, he is broke and bored. Grady (Chris Gartin) appears out of nowhere with an oil executive with a tempting offer: come to Mexico and kill graboids for $50k a piece. Despite some hemming and hawing, Early is quickly back in the action.

Grady serves as our replacement for the sarcastic Val (Kevin Bacon—who is not in this film) and leaves a bit to be desired. Val was sarcastic and seen as a screw up in the first one, but he wasn’t dumb. They opted to make Grady more of a comedic relief through idiocy than wit. Gartin does his best to draw some charm out of the character to mixed success.

We also have the return of Burt (Michael Gross) who is still a little insane. Things seem to be going well as they are all able to trick the graboids into eating remote cars with bombs attached to them. However, a new mutation appears, and our merry band of misfits must find a way to survive the unpredicted threat.

The film is surprisingly not bad. I can’t imagine hopes were high for a straight-to-video sequel six years later, but it works. The film does a few things right and a few things wrong.

One of the wiser decisions the film makes is to abandon the horror elements of the narrative. This is an action/comedy much more than a horror/comedy. While the transition isn’t perfect, it works in that the tone of the first film can’t be recaptured.

While the more action-oriented format works, it also undermines the first film. In the first, the graboids became smarter and figured out that they shouldn’t eat the bombs. Here, they don’t seem to be as threatening of a creature. We deal with a couple dozen of them here while in the first four made a major threat. If they had opted to continue with the horror-tone the movie would have failed.

The lack of tension does make the quieter moments a bit slower. The pacing of this film is not as tight as the first. Without the graboids representing a serious threat we don’t need the calmer moments as much.

The locales work mostly well here. For much of the film we are on the plains, and the natural landscape works. Where things seem a little odd is that the refinery seems to just be a few outbuildings. The buildings seem too small to be housing a major operation. The interior sets are fine, but they don’t have the same lived-in feel that the original did. This is a sign of budgetary constraints, and the decision to keep our characters in nature for most of the movie is a wise one.

As with most movies, the practical effects hold up nicely. The creatures look great when we have puppetry. They look a bit like rubbery puke when they’re CGI. I don’t have much to add to this analysis. The shift away from practical effects in the industry is going to date films quicker than they need to be. I’ll take a puppet with all of its limits over CGI any day.

This is a good enough film to watch on a sleepy afternoon. The adventure follows the necessary beats to be a light consumable to pass the time. There are cringey moments, of course, but overall, I think this is still a fun flick to watch. However, as we get deeper into the series, I think we will have an issue with audience investment. I can quickly see this becoming for diehard fans only.

Give this one a go if you’re in the mood for a decent action/horror/comedy hybrid that is made well without taking itself too seriously.