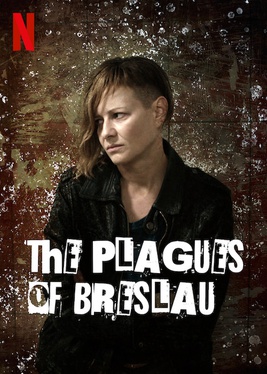 The Plagues of Breslau (2018) Film Review

The Plagues of Breslau is another Netflix original film, this time we have a crime thriller from Poland. We follow detective Helena Rus (Malgorzata Kozuchowska) as she investigates a series of killings that seem to have a historic angle to them.

The killings are interesting, we end up with elaborate murders that harken back to classics in the genre like Se7en with their complexity. Helena works to solve the crimes with an odd haircut and even odder new partner Magda (Daria Widawska) to try to figure out who is responsible.

The film’s major narrative doesn’t add a lot new to the table as far as crime dramas go. I think most folks who have seen one in the last ten years will recognize a lot of the tropes that are present here. There are a couple twists. I’m not sure how predictable they are—not sure why, but I figured both out. I think some viewers will get it quickly and others will be surprised.

Where this film differs from your standard cop fare is that we have women in the primary roles. The inherent patriarchal and classist structures in society are constantly butting up against these two. Those in power trample on those without. Yes, we’ve seen this before, but it is nice to see it from the perspective of those suffering.

Despite being a fairly familiar story, this one does have some nice right hooks to keep things interesting. In some ways, it ends up better than average for the genre, but it never reaches greatness.

The issues in the film come from a hard to like protagonist in Helena, and an unapproachable Magda seems to know too much about everything. Some of the other cops seem competent, many do not, and we end up with way too much screen time with the dumb and drunk D.A. Yeah, I know this is part of the point the film is making but it needed to do more with these images. I guess I just wanted more.

Another odd aspect of the film is the spectators to the crimes. One involves a running horse, and the people act like they’re being chased by some sort of monster. Another killing with a moving part later on has the same thing of an almost comical showcasing of people jumping and diving out of the way. Small moments like this will stand out as you watch the movie. Larger plot holes will come with looking back on the story as a whole. In short, this one will push your suspension of disbelief to the limit and then some.

Despite the flaws, I did enjoy my time with it. There are some odd narrative choices that I think clutter up what could have been a tighter experience. The acting is good, but we end up with fairly one-dimensional characters. Here’s the tough guy, the corporate stooge, the drunk, the grieving wife, and the sad mom to name a few. Part of the limitations of the characters comes from the shorter running time and a breakneck pace. There seems to be a tradeoff for making things click as quickly as possible in exchange for stronger development.

This is the sort of film Netflix should be emphasizing. It is a clean slab of genre meat with enough smarts to shake things up a bit. It won’t be your favorite, but you won’t hate your time with it. These steady genre pieces will age much better than some of the garbage Netflix is now stuck with.

Give it go if you like crime dramas. It won’t surpass your favorites, but it will keep you entertained.